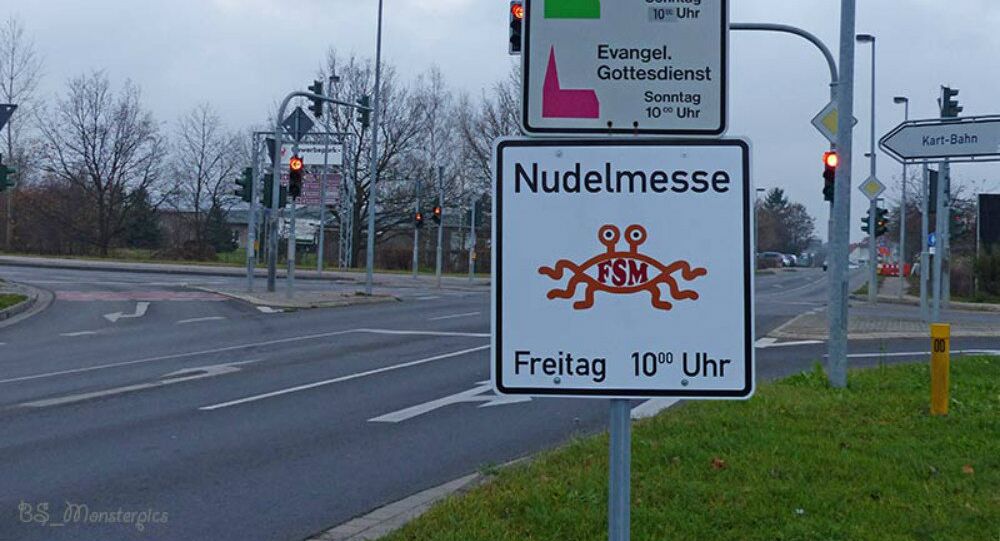 A long-running legal dispute between the state authorities of Brandenburg and the followers of the "Church of the Flying Spaghetti Monster," who want parity with other religious groups, is set to reach its conclusion next week, Berlin-Brandenburg Radio reported.

© Photo : Nikolay Kazakov / volocopter.com
Flyway or the Highway? German Heli-Car Promises End to Traffic Jams
Followers of the "Church of the Flying Spaghetti Monster," who are also known as pastafarians, in the north German town of Templin have sued the state authorities of Brandenburg for removing road signs that point to their place of worship, Berlin-Brandenburg Radio (RBB) reported.

On April 13 a district court is set to rule on the dispute, which began in 2014 when representatives of the Templin branch of the Church of the Flying Spaghetti Monster decided to hang signs with their worshipping times at the four entrances to the town of Templin, on the same roadside poles that local churches use to advertise their services.

The German highway authorities took the signs down, and returned them to the pastafaris, who promptly hung the signs up again.

The matter was the subject of a parliamentary question tabled to the Brandenburg state parliament in Potsdam in December 2014. Brandenburg's Minister for Science and Culture Sabine Kunst responded that the signs were taken down according to a federal directive that allows road signs to be displayed for church services and other regular events of religious communities.

"The Church of the Flying Spaghetti Monster has the status of registered association in Germany. It is a parody religion without serious religious substance," Kunst replied.

© Photo : islamnews.ru
Inner Peace: Berlin's House of One Aims to Unite Christians, Muslims & Jews
In July 2015 the pastafarians filed a lawsuit against the state of Brandenburg in Potsdam district court, in order to receive equality with religious organizations and with it the right to display their signs; the court is set to announce its judgment on April 13.

If the court rules in their favor Germany's trail-blazing Pastafarians will not be the first in Europe to be awarded the same rights as religious organizations. In January the Church of the Flying Spaghetti Monster was recognized as a religion by the Chamber of Commerce in the Netherlands.

​The Church of the Flying Spaghetti Monster was established in the US by self-proclaimed prophet Bobby Henderson in 2005. The church claimed to have "millions, if not thousands, of devout worshipers," who believe that humans evolved from pirates, who "were the original Pastafarians and peaceful explorers."