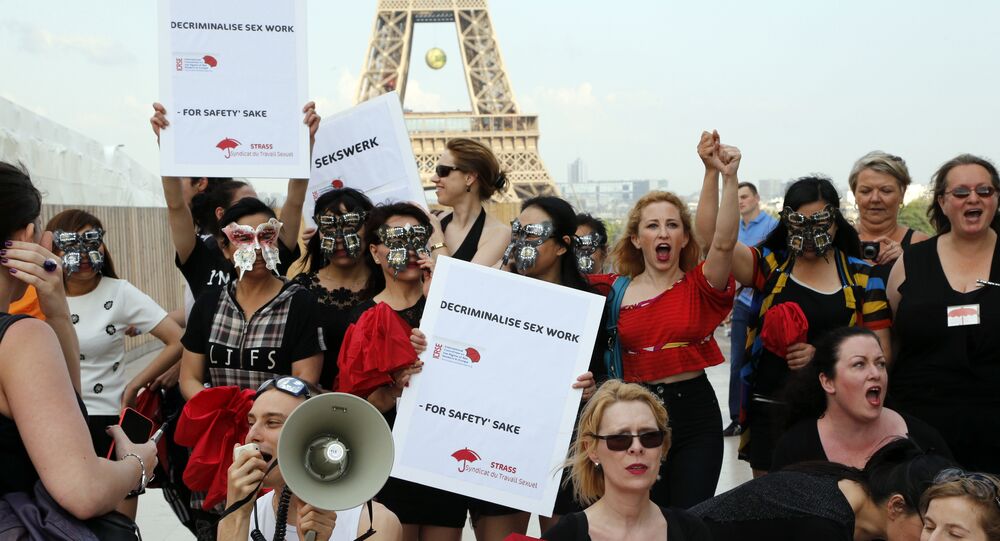 French MPs have given the green light to a law that allows the authorities to fine the clients of prostitutes, according to media reports.

© Sputnik /
'Night Men': Male Prostitutes Roam the Streets in Egypt
A controversial law that makes it illegal to pay for sex has been passed by French lawmakers; the law imposes fines of up to 3,750 euros (4,270 dollars) on prostitutes' clients and mandates that they attend classes on "the harms of prostitution."

Socialist lawmaker Maud Olivier, a feminist who added significantly to the adoption of the bill, was quoted by the news agency AFP as saying that the law is part of measures aimed at tackling prostitution.

"This law is essential to ending the idea that it is normal to buy someone's body. We will succeed in changing the mentality, but new efforts are needed to raise awareness, to train police officers and magistrates," Olivier said.

During the final debate on the bill, about 60 sex workers staged a protest rally outside a parliament building, news reports said, adding that the law is expected to affect the livelihoods of at least 30,000 prostitutes in France.

France gave in to the conservative demands to penalize paying for sex. The French government will earn 1500€ from clients. Just like a pimp.

Some protesters carried banners reading "Don't liberate me, I'll take care of myself!" Another poster read "Sex work is work."

© AP Photo / Felipe Dana
US Navy Officer Sentenced for Selling Classified Data for Cash, Prostitutes
Under the new law, clients caught paying prostitutes for sex will be fined 1,500 euros, which will rise to 3,750 euros for repeat offenders. The law has been on the table since December 2013, when it was first submitted to the French parliament.

Sweden became the first country in the world to announce in 1999 that it would punish people for buying sex rather than selling it, in a move to avoid criminalizing the victims of sex trafficking. Norway, Iceland and Northern Ireland have also adopted this model and the European parliament has approved a resolution calling for the law to be adopted throughout the continent.