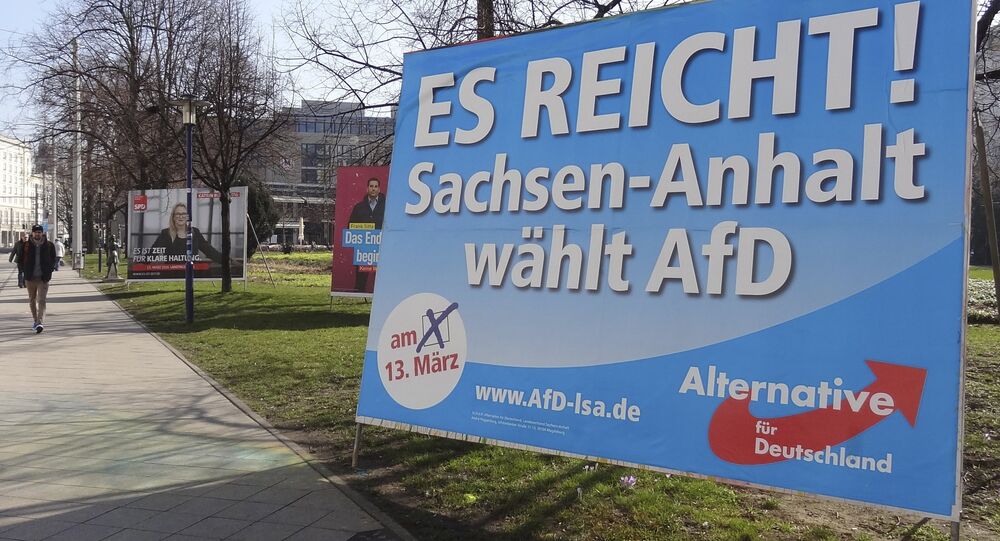 German conservatives opposed to migration are considering removing a member from a party list in upcoming elections, amid allegations that she ran an escort service which supplied young German women to men in wealthy Arab countries.

The right-wing Alternative for Germany (AfD) party was hit by a scandal, after one of the candidates in its local elections, Petra Federau, was alleged to have managed an escort service, which supplied young German girls to wealthy Arab countries.

AfD is a conservative party, which campaigns for ending uncontrolled migration to the country. Because Federau refused to answer questions without a lawyer present, she could have something to hide beyond a simple escort service, according to Thomas Jesus de Fernandes, head of the Schwerin AfD branch in northern Germany.

"From the press we learned that Petra Federau was allegedly involved in providing escort services. We wanted to have a conversation with her and so far we have had quite a relationship of trust. But this time, Petra decided not to talk to us. She referred to her lawyer, through which all communication on this subject would take place. It makes us a little puzzled," Fernandes told Sputnik Deutschland.

© Photo : Youtube/ JuskyNews
Oops! German Party Member №3 Suspected of Operating Escort Service
The secrecy that Federau gave the case raised doubts among other party members, as a simple escort service operated at some time in the past would not necessitate the hiring of a lawyer as counsel before the party.

"In this respect, we are united: if it is only escort service, then we can take it easy. It would not have served as an occasion for delisting. We're not some bronzed party, as it often appears in the media," Fernandes told Sputnik Deutschland.

He added that despite being labeled as an ultra-conservative, or even "Nazi" party in Germany, AfD is accepting of everyone, and only has policy differences with less conservative groups.

"I am a homosexual. The question I never made a subject of discussion. I am Brazilian, living in partnership with a man. It slightly doesn't correspond to the usual clichés about our party. I was unanimously elected chairman of the district office. It shows that we are open to the world, and does not suffer from complexes, as some people think. I do not use it for political purposes, but do not hide it either," Fernandes told Sputnik Deutschland.