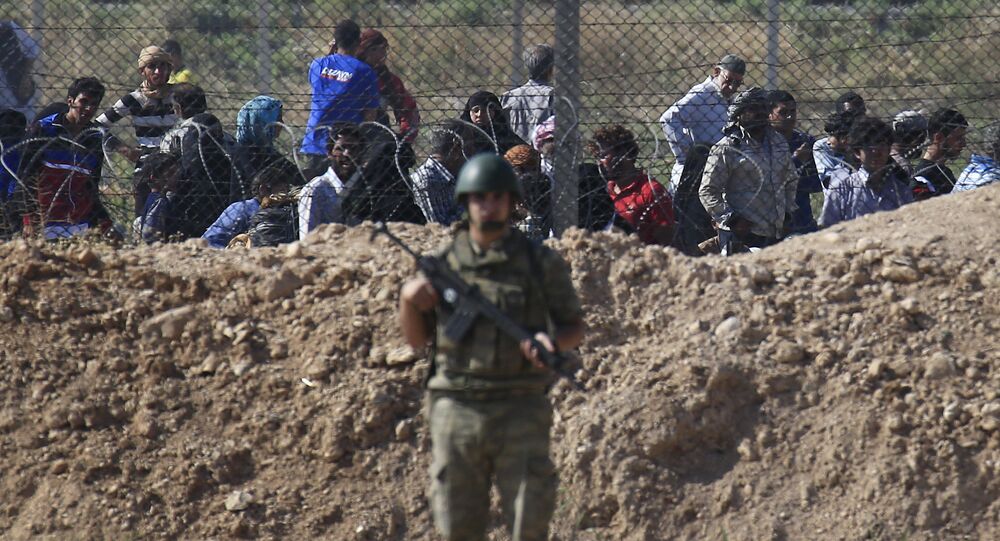 With 16 Syrian migrants, including three children, reportedly killed over the past four months while trying to cross into neighboring Turkey, Sputnik discussed the situation with the President of the Turkish Human Rights Association Öztürk Türkdoğan.

© REUTERS / Yves Herman
Turkey Sends Thousands of Refugees to Die or be Enslaved in Syria
Mr. Türkdoğan said that, according to the Association’s 2015 report, a total of 25 people, including one child, were shot and killed by Turkish security forces on the Turkish-Syrian border last year. Fifty-two people were wounded, four of them children.

“As we can see, the policy of open doors or open borders proclaimed by Ankara with regard to Syrian refugees is not working,” Öztürk Türkdoğan told Sputnik.

He added that because the border with Syria was protected by the Border Guard Troops, the entire area was considered a war zone with its own jurisdiction, which means that crimes committed there are subject to military, rather than civilian, investigation.

As a result, most of such incidents are never properly investigated.

“On the other hand, relatives of those who are killed or wounded are usually foreigners whose chances of a proper investigation are extremely limited,” Mr. Türkdoğan said.

“The Turkish borders are open only during mass-scale migrations and are closed the rest of the time. Which means that refugees who trying to cross in illegally get killed. This practice flies in the face of the international convention on the status of refugees, because these people are running away from the war raging in their country and they seek asylum in Turkey,” he noted.

The situation currently existing on the Turkish-Syrian border violates the terms of even the agreement on migrants Turkey signed with the EU last month.

“Refugees are not a subject of political or economic bargaining. The EU needs to realize that what we have here is a violation of the convention on refugees. However, the EU, which is trying to stem the tide of incoming migrants with the help of illegal internationally-banned methods, unfortunately keeps mum about all this,” Öztürk Türkdoğan emphasized.

“There is one thing the international community needs to understand: while the war in Syria continues, migrants will keep coming in. You can’t reverse this influx of refugees by shooting at them and erecting all kinds of hurdles on their way,” he added.

New research conducted by Amnesty International in Turkey's southern border provinces suggests that Turkish authorities have been rounding up and expelling groups of around 100 Syrian men, women and children to Syria on a near-daily basis.