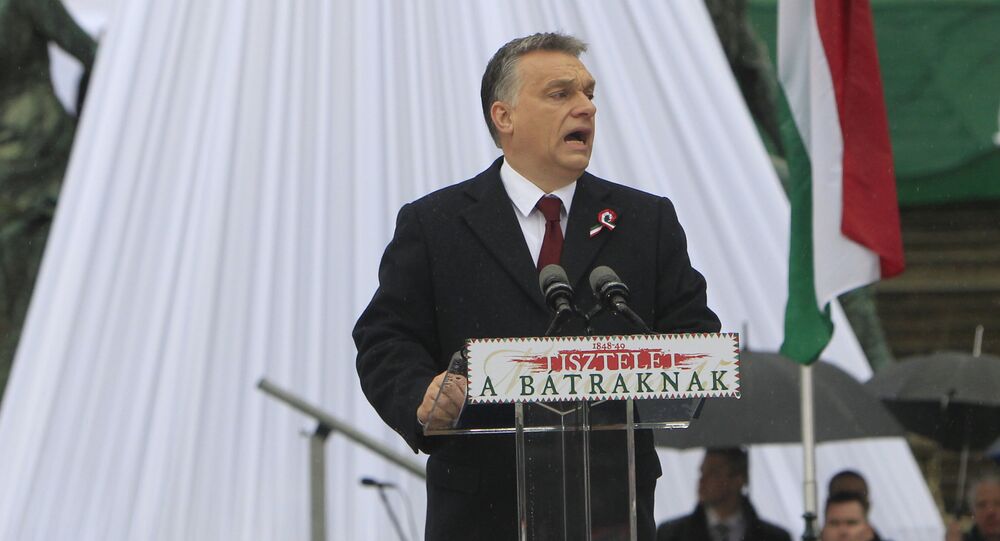 Hungarian Prime Minister Viktor Orban has launched another attack on the EU, accusing the bloc of being responsible for the migration crisis, while saying top officials in Brussels want to create a "United States of Europe" that will "swallow up member states."

The outspoken PM reaffirmed his criticism of EU-led migration proposals and calls for greater integration within the bloc, saying "the time has come to ring the alarm bells and gather allies."

"If we want to stop the mass migration, first we must put the brakes on Brussels," he said.

Orban has been a staunch opponent of previous proposals aimed at establishing an EU-wide asylum seeker relocation scheme, and has organized a national referendum against any potential plans to implement refugee quotas among member states.

© AFP 2021 / Joe Klamar
Migrants struggle to board a bus sent to pick them up on the closed highway A4 towards Vienna at the Austrian side of the border between Hungary and Austria on September 11, 2015 near Nickelsdorf, Austria.

While saying that Hungary was willing to help "real refugees," Orban has opposed accepting large numbers of Muslim refugees into the country.

'Truth Not Allowed to Be Told'

In a further attack on the state of affairs in the EU, Orban raised concerns that many of the issues relating to the refugee crisis were not being properly discussed, because "the truth is not allowed to be said."

"It is forbidden to say that immigration brings crime and terror to our countries," Orban said.

"It is forbidden to say that the arriving masses from other cultures are a threat to our way of life, our culture, our habits and our Christian traditions," the PM added, arguing against mass migration.

"Mass migration is a slow water which erodes the shore with a persistent flow," Orban said. "It masquerades as a humanitarian issue but its true nature is to occupy space."

Hungary has drawn the ire of EU officials over its handling of the migration crisis, with the country heavily criticized for erecting a razor-wire fence along its external border.

However, Budapest has rejected the criticism, arguing that it was merely protecting its external borders amid a huge surge in the number of 'illegal' entries into the country.