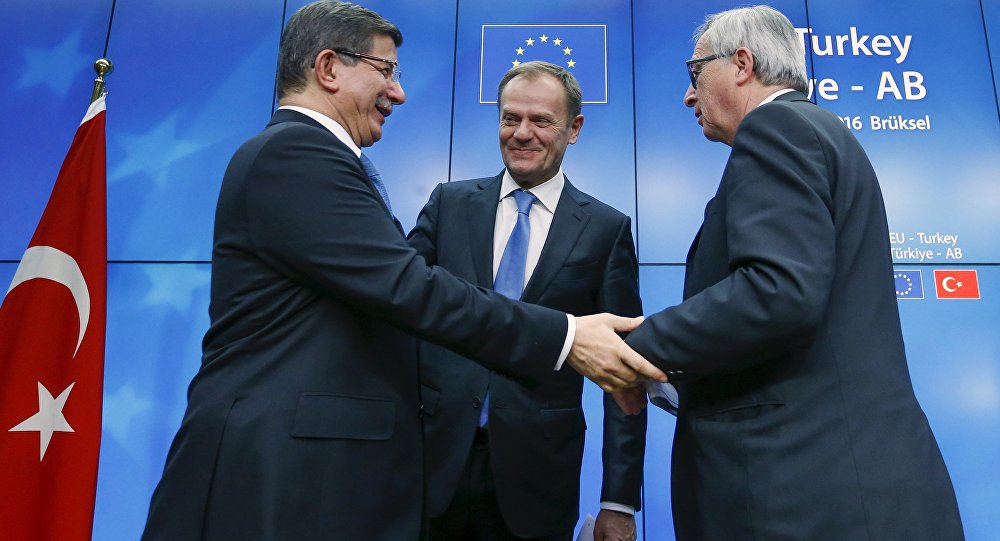 Ankara’s firm stance at the summit with the European Union was in particular provoked by Ankara’s intention to put pressure on Brussels to normalize ties with Russia, according to a US think tank.

© AP Photo / Santi Palacios
Shotgun Wedding: EU-Turkey Summit is Marriage of Desperation
The official topic of the summit between the European Union and Turkey on March 7 was the migrant crisis in Europe. However, while EU leaders and their Turkish counterparts are discussing the ways to reduce the number of asylum seekers the real issues on the agenda are much broader, analysts of the US think tank Stratfor wrote.

Ankara and Brussels are discussing a plan according to which Turkey would receive €3 billion in exchange for assistance in dealing with the influx of refugees. However, in addition Turkey requested the faster implementation of a visa-free regime with the EU and the acceleration of accession talks to the bloc.

© REUTERS / Fotis Plegas G
Broken Promises & Lack of Leadership Imperil Latest EU-Turkey Migrant Deal
"Ankara is well aware that both topics are controversial for some EU members, which is revealing of the fact that Turkey's goal extends way beyond visas or EU accession," the article read.

Turkey’s tough stance at the negotiations is linked to the Syrian conflict, it added. Ankara has been for long promoting the idea of a no-fly zone over its border with Syrian and a so-called "safe-zone."

"But Russia's ongoing military intervention in Syria makes a no-fly zone by the United States and the European Union too dangerous without Moscow's participation. Neither the United States nor Europe wants to risk a war with Russia," according to the article.

Therefore, Turkey is using the migrant crisis to pressure EU leaders to reach a compromise with Russia. According to Stratfor, the main obstacle for this is economic sanctions Europe has been applying to Moscow since the Ukrainian crisis broke out in 2014.

The authors also noted the growing number of those calling to lift the sanctions in Europe.

"Though some EU members have spoken against the sanctions, Germany has so far managed to keep the bloc united, and the different packages of sanctions have been extended every time they have expired. But this system is becoming harder to maintain," they wrote.

The "weakest links in the sanctions chain" are the countries most affected by the migrant crisis.

"Nations such as Italy, Greece and Hungary have expressed a desire for the quick lifting of sanctions. Those countries have major trade and energy ties with Russia, which means that easing sanctions could benefit them in multiple ways," the article read.