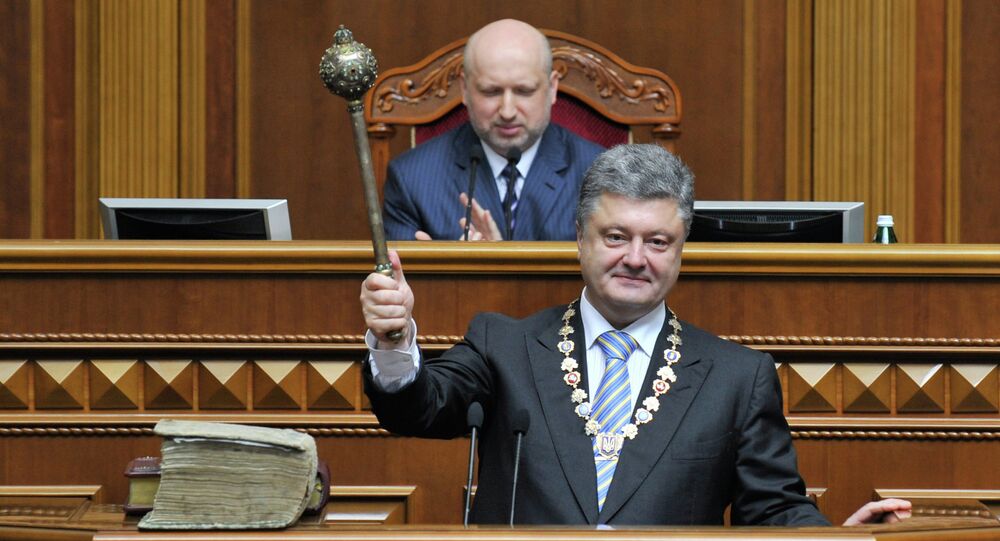 Last month, former Ukrainian President Viktor Yanukovych's lawyer announced that the ousted head of state intends to return to Ukraine, stressing that his removal from office was a violation of the country's constitution. Oleg Tsarev, a prominent former Ukrainian lawmaker, himself persona non grata in Ukraine, offers his thoughts.

In February 2014, violent clashes between protesters and law enforcement in Kiev culminated in the Maidan coup d'état which forced then-President Viktor Yanukovych, an unpopular but democratically elected president, to flee the country in fear for his life.

"He has intentions to return to Ukraine, and legal steps will be made for this. Yanukovych has not relinquished his presidential powers and has not withdrawn from the country's leadership," Serdyuk said. The lawyer emphasized that the procedure for removing the former president from office was carried out in severe violation of the constitution.

© Sputnik / Sergey Guneev
Ousted Ukrainian President Yanukovych Intends to Return to Country
Oleg Tsarev, a Ukrainian politician who served as one of the earliest and most virulent opponents of the events of Maidan, commented on Yanukovych's plans, saying that the ex-president may yet play a role in resolving Ukraine's dramatic political legitimacy crisis.

"For anyone with even the slightest knowledge of Ukrainian law, it is absolutely obvious that Yanukovych and the parliamentary MPs elected together with him, along with [Prime Minister] Mikola Azarov's cabinet, are the only legitimate authority in Ukraine. This is the conflict we face today: de jure, Yanukovych is the president, but de facto, it's [Petro] Poroshenko," Tsarev noted, in an op-ed for Russia's Svobodnaya Pressa online newspaper.

From the legal point of view, the politician continued, everything Yanukovych's lawyer said in his interview was correct. "As far as the Ukrainian Constitution is concerned, all the laws and appointments in Ukraine since the victory of the Maidan are illegal. Poroshenko's election is illegitimate, since the elections law, and the necessary procedures were not signed off on by Yanukovych."

"For the same reason, not only is Poroshenko the illegitimate president – so is the entire cabinet of ministers, and the current Verkhovna Rada [Ukraine's parliament]. Yanukovych did not sign off on the appointment of lower-ranking officials – the heads of regional and district administrations, ambassadors, the heads the security organs, either."

This, Tsarev suggests, means that "the entire vertical of power in Ukraine today is de jure illegitimate." In essence, this means, for instance, that "the foreign loans now being taken out by [Prime Minister Arseniy] Yatsenyuk will not have to be returned, because his signature on these documents has no legal authority."

© AP Photo / Andrew Kravchenko, Pool
Washington's Experiment on Ukraine Proves Costly for the Ukrainian People
The legal collision between pre-Maidan authorities and their successors, the politician notes, "will continue forever, or so long as they are not properly dismissed, and without Yanukovych's help, this is impossible."

"Did the leaders of Maidan understand that this kind of situation would develop? Of course they did. I question a lot of things Yanukovych now says about himself in retrospect, but I know for a fact that [in the aftermath of the coup] he was being hunted personally. Why? Because everyone understood perfectly well that only his death could disentangle the legal contradictions and conflicts that arose following the coup and the armed seizure of power in Ukraine."

This is not the first case in Ukraine's history when political figures violated basic laws, Tsarev recalled. "There are many questions about Ukraine's exit from the Soviet Union in 1991; in 2004, an illegal third round of presidential elections was organized under Leonid Kuchma; Yanukovych himself had introduced illegal changes to the Constitution, and it has been illegally changed since then as well."

"To summarize," the politician noted, "Ukraine today does not have legitimate authorities, and there is no legitimate Constitution."

© Sputnik / Stringer
Kiev Ignores UN Appeals to Investigate Maidan, Odessa Massacres
Ultimately, Tsarev noted, "many countries in their infancy have had 'rough patches'. It happens; the sky hasn't fallen, and life goes on. A government can ignore the legality of its actions if it is strong, and has the support of its population and a strong international position."

"It would be this way in Ukraine as well, if things were going well. In spite of everything, I think that Poroshenko, Yatsenyuk, and the other usurpers understand this perfectly well, and they should be reminded at every opportunity."

"Personally, I believe that sooner or later, the organizers of the Maidan and the war in the Donbass will be convicted, and Yanukovych will be able to fulfill his historic function – to return to Ukraine and designate new presidential and parliamentary elections," Tsarev concludes.