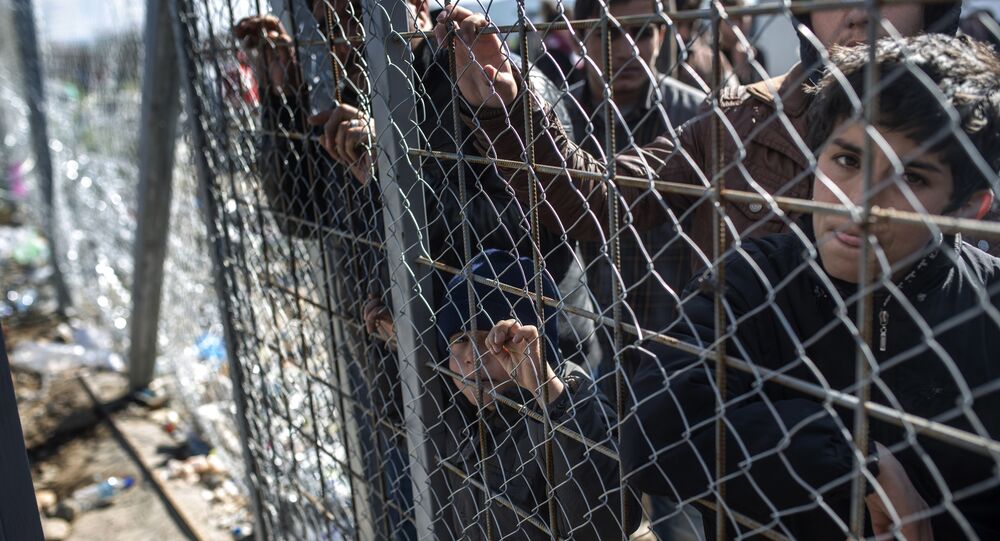 Greek police transferred Afghan migrants and refugees to camps in the northern village of Diavata several days ago, amid Macedonia refused entry to every single migrant and refugee, according to Greek media.

© REUTERS / Yannis Behrakis
Macedonia Reopens Border for Refugees Heading to Germany, Austria
ATHENS (Sputnik) – Up to 6,000 migrants and refugees have amassed in Idomeni camps on the Greek side of the border awaiting permission to enter a neutral zone on their way to Macedonia, Greek media reported Saturday.

As of Friday, Macedonia refused entry to every single migrant and refugee. Macedonia, Croatia, Serbia, Slovenia and Austria refused to grant passage to Afghan nationals, while limiting Syrian and Iraqi entries to 580 people a day.

Greek police transferred Afghan migrants and refugees to camps in the northern village of Diavata several days ago. Around 2,000 people are estimated to be housed at up to 600-capacity Diavata.

Many refugees choose to reach Idomeni from Athens by foot.

Greek officials capped refugee transportation from islands where migrants land from Turkey, threatening a sharp spike in numbers on Aegean islands. Only 437 migrants arrived in the continental port city of Piraeus on Saturday, in comparison to up to 4,000 daily arrivals previously.

© AP Photo / Santi Palacios
Greece Refuses to Be Only EU Country to Accept Refugees
On February 17, Austria announced it would place a daily limit of 3,200 people entering its territory and that it would cap its acceptance of new asylum applications to 80 per day.

The following day, police chiefs in Austria, Slovenia, Croatia, Serbia and Macedonia announced an agreement to jointly profile and register refugees and asylum-seekers at the border between Macedonia and Greece.

NATO's maritime operation to combat smuggling networks, meanwhile, is so far limited to informing Turkish or Greek authorities of migrant boats, as confirmed by the alliance’s leadership. There was no word of returning migrants or refugees to departure stations.

On Friday, the Greek Defense Ministry noted a 5,000 increase among migrants over the past 48 hours. Online outlets cited military sources as saying Greek officials requested tents and containers to accommodate half a million people.

Number of Refugees Coming to Greece, Italy Increases Fivefold in 2015