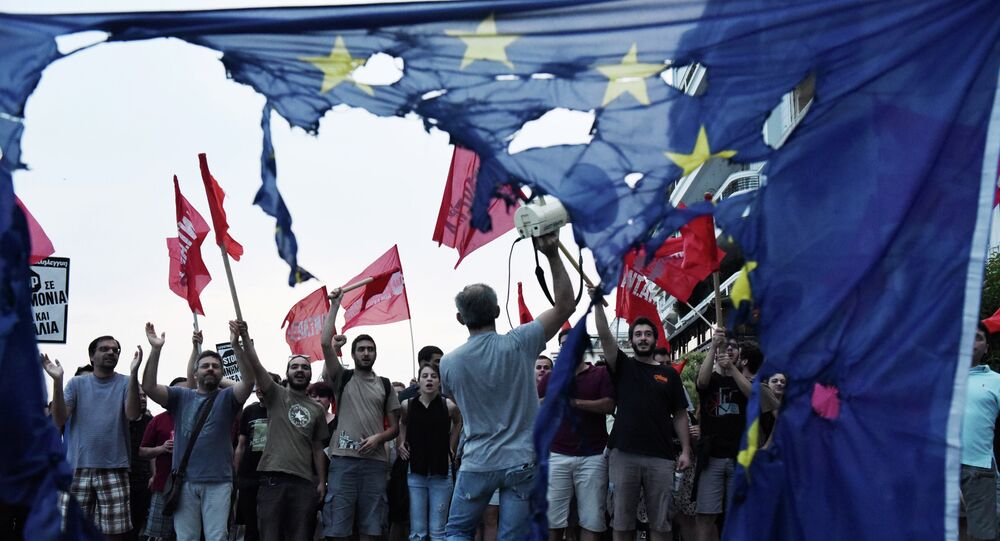 EU politicians and European heads of state are desperately looking for ways to save the European project, but a series of powerful anti-EU shocks, and growing public distrust makes a Soviet-style collapse seem almost inevitable, French economist Charles Gave suggests.

© Flickr / Charles Clegg
Forget Brexit, Grexit: EUexit on Cards Amid Rising Euroskepticism
Beset by crises from all sides, from the prospects of a Brexit to the ongoing migrant crisis to a negative economic outlook, cracks have appeared in the EU project, France's Atlantico newspaper recalls.

Speaking to the newspaper, Charles Gave, an economist and president of the liberal think tank Institut des Libertes, was asked why he believes the European Union project may eventually face the same fate as the old Soviet Union.

"The disaster of the quotations of European banks shows that something has gone terribly wrong," the economist warned. "I have never seen a scenario where the collapse of major European banks was not followed by a recession in Europe. So the answer to your question is simple: if a recession happens in Europe in 2016, the euro will not survive."

"For example," Gave recalled, "in Italy, bank debts already constitute 20% of GDP, and might cross the 30% or even 40% threshold, which is obviously not tenable. For years now, the euro has served as a financial Frankenstein: it is impossible to maintain a fixed exchange rate for countries that have such differing production capacities."

"I wrote back in 2002 that the euro would lead to too many houses in Spain, too many officials in France and too many factories in Germany, and that Europe would fall under German influence, with Germany remaining the only country with a positive net balance."

© Sputnik / Vitaly Podvitskiy
Building Blocs
"As for the formation of a [single] European state," Gave noted, "France, Germany and Italy are real states – Europe is not. Europe is a civilization, not a state. The supporters of the euro have, for 15 years now, been killing the continent's economies, and if a recession begins in 2016, the European people will take the wheel away from those whom they did not elect – from [European Council President] Donald Tusk and [European Commission President] Jean-Claude Juncker. A union [in itself] does not necessarily indicate strength, because if that was the case, the Soviet Union would be the main world power…"

Ultimately, Gave suggests, "strength lies in a competitive economy, and not in a bloated organization which no one wants – one which destroyed the fruits of the labors of the founding fathers of Europe. Schumann, Adenauer and Piux XII desired to establish a Europe based on diversity. The malefactors who created the euro want instead to create a European nation…and are responsible for the looming catastrophe on the horizon."