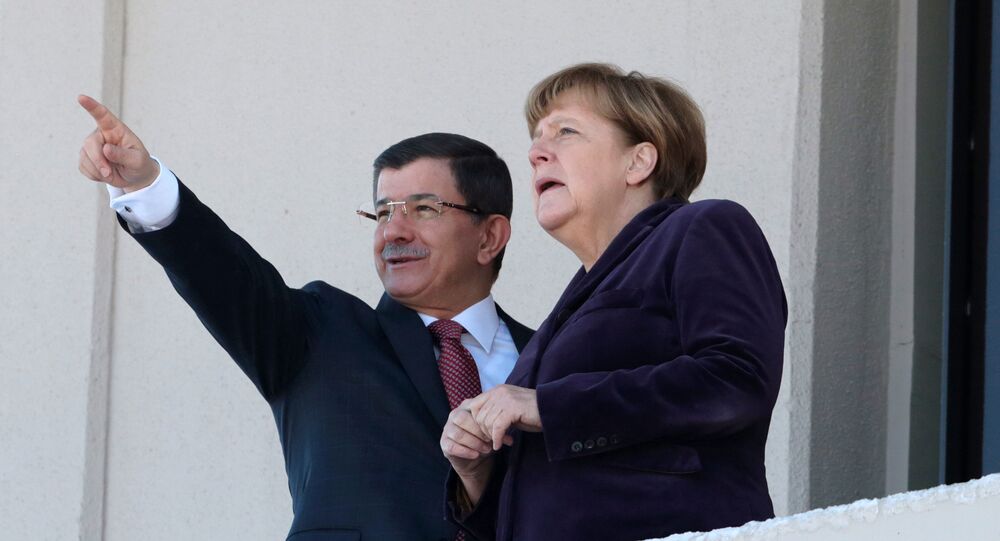 Unexpected difficulties have occurred in the context of Germany's cooperation with Turkey - Angela Merkel's last hope for the resolution of the refugee crisis.

© AP Photo / Armin Weigel
Bottomless Pit? Germany to Increase Aid to Turkey in Tackling Refugee Crisis in 2016
The government in Ankara is refusing to accept a paragraph in the agreements between the EU, NATO and Ankara, according to which boat refugees rescued by NATO ships are to be returned to Turkey, German newspaper Deutsche Wirtschafts Nachrichten (DWN) reported.

According to the newspaper, German Chancellor Angela Merkel might have exaggerated the progress in the negotiations with Turkey with a view to the forthcoming elections. If it turns out that the deal with Turkey has not worked, the impact on Merkel's CDU party's prospects to win the next elections would be devastating.

However, Turkey's stance is not the only factor that may endanger Merkel's plan. Another one is a great chaos on the border between Greece and Macedonia, where more and more refugees are trying to find a way to by-pass the newly introduced restrictions.

Over the last few days, Macedonia has tightened its border policy and allows the transit only to refugees from Syria and Iraq. Migrants from Afghanistan who had previously been "automatically" viewed as refugees are currently being forced by Macedonian authorities to return to Greece.

Earlier other EU countries such as Austria and Slovenia placed daily limits on a number of people entering their territory, thus, given up their support for Merkel's policy of open-doors. Currently, the German Chancellor is also under increasing pressure within her own party with many complaining that Merkel had underestimated the extent of the migration crisis and lost contact with reality.