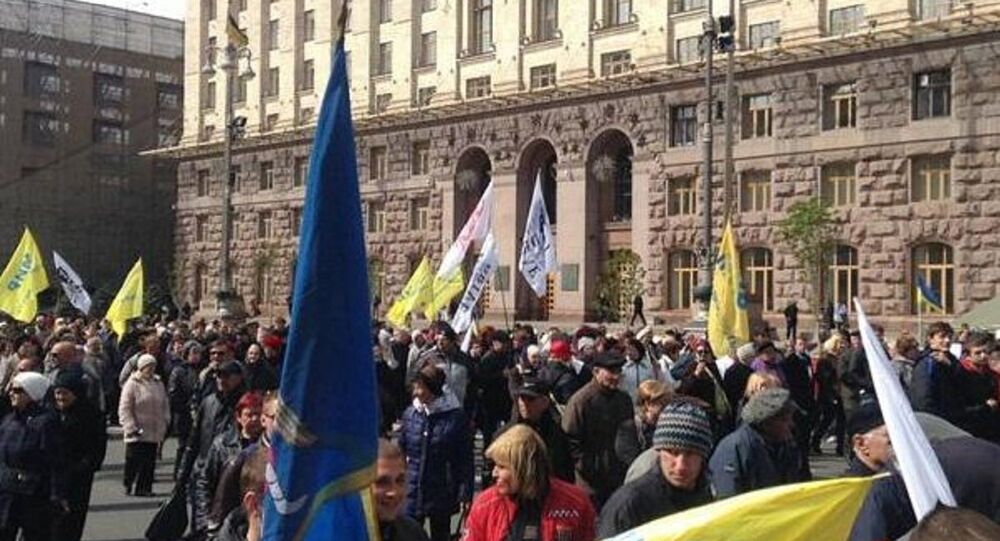 The Ukrainian government is working on adding extra security at administrative buildings due to protests and clashes between police and radicals that have started once again in Kiev.

"Right now even motorcades have been reinforced with armed men. In the back of the Cabinet [of Minister] and inside of the building armed national guardsman are on duty. I saw them from the windows of the Committee on Sadovaya [Central Kiev]," Sergei Kaplin, a lawmaker from the Petro Poroshenko Bloc said.

According to Kaplin, Kiev authorities have also started checking shelters and underground passes exiting the building of the Cabinet of Ministers and the Presidential Administration amid new protests that have started in Kiev.

"There is a very extensive network of underground tunnels… From the Cabinet of Ministers one can access the Khreshchatyk metro station," the Kiev politician said.

Former lawmaker Taras Chornilov explained that the most vulnerable spot in terms of security is the building of the Verkhovna Rada.

"The windows at the Rada don't even have grids," Chornilov said.

Looks like the government in Kiev is getting ready for another coup as the citizens of Ukraine aren't happy with the current situation in the country. But this time, knowing what might happen when radicals occupy central Kiev, the current government is actively getting ready to keep its leadership safe if things get hot.

Ukraine underwent a regime change in February 2014, following mass protests at Kiev's central Independence Square, known as the Maidan. Many Ukrainian citizens, including those from southeastern regions of the country refused to recognize the new government that had come to power after what they considered to be a coup.

According to official information from Ukraine's Health Ministry, the clashes on the Maidan resulted in the deaths of 104 people. According to other sources the Maidan death toll was at around 780 people.