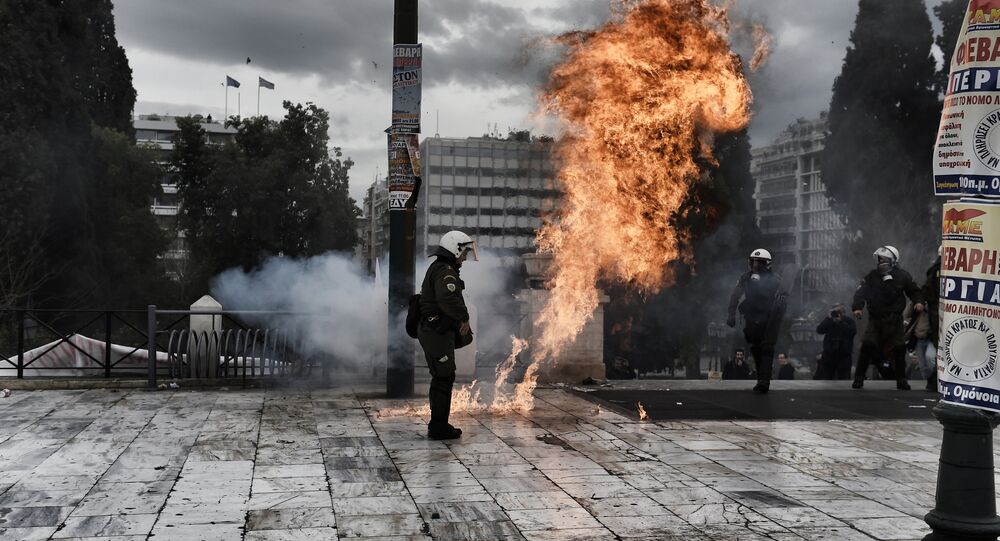 There have been further protests across Greece amid growing anger at demands by the European Commission over its handling of the refugee crisis as well as rising acrimony over the conditions of the bailout agreement.

The number of protests on the streets has been growing in recent weeks with thousands turning out, demanding more aid from the European Union over the refugee crisis, which has seen Greece — along with Italy — bearing the heaviest burden.

The migrants have been pouring into the Greek islands for more than two years, but the situation has worsened since German Chancellor Angela Merkel said her country's doors were open to refugees — creating a huge rise in the number of people fleeing war-torn regions such as Syria, Iraq and Afghanistan.

The numbers have reached 3,000 per day arriving on the Greek islands, whose residents are now becoming angry at the lack of support they are receiving.

There is particular anger in Greece over European Commission demands that it set up special 'hotspots', or reception centers, where refugees can be photographed, fingerprinted and processed to define if they are genuine refugees escaping war and persecution, or economic migrants.

However, the promised extra EU staff and aid from the EU border agency Frontex has taken months to materialize and EU plans to relocate 160,000 migrants from Greece and Italy have only seen around actually moved in six months.

As at January 2016, only 202 migrants or refugees had been relocated out of Greece. In December 2015, only two out of five Greek hotspots were operational and the European Commission has been putting pressure on Athens to do more to speed up the processing of migrants.

#GREECE: Progress Report — fingerprinting of new arrivals up to 78% in Jan (from 8% in Sep)https://t.co/Bxa0dLfC2Y pic.twitter.com/ANdnJfhuF6

There are now 184 Frontex staff on the hotspot on the Greek island of Lesvos, which has a capacity of only 2709; 99 officers on Chios, with a capacity of 2250; 53 on Samos, catering for 650; 31 on Leros which can only take in 330 migrants; and 54 on Kos, dealing with 290. However, the authorities on Kos have threatened to hold a referendum on even establishing the hotspot on the island, because many fear it will become a permanent refugee camp and blight tourism on the island.

However, many Greeks says this is simply not enough to deal with the thousands of refugees scattered all over the islands with more arriving daily. There have been demonstrations across Greece expressing anger over Brussels' demands that Athens takes control over the situation by next week, or be thrown out of the Schengen zone.

Meanwhile, there is continuing anger over the terms of the third bailout deal imposed by Brussels, under which the entire state pension scheme is being completely revamped and taxes are rising, amid harsh austerity measures.

Farmers have blockaded key roads and bridges — including the border with Bulgaria — for weeks in protest at pension cuts, imposition of tax on wine and tsipouro brandy, demanding also exemptions to diesel tax. They are threatening to take their tractor protests to Athens on February 12.