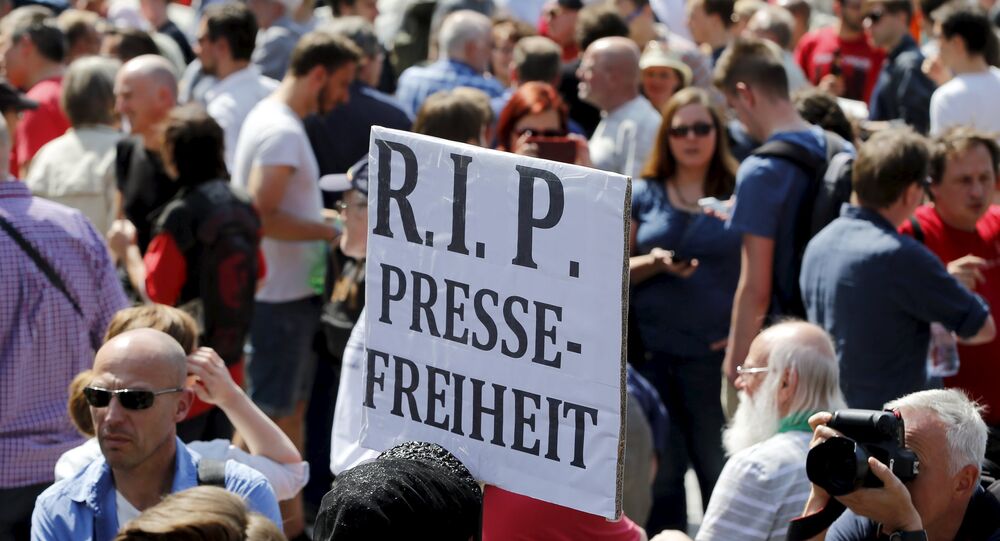 German journalist and former director of the ZDF-studio Wolfgang Herles has accused German media of obedience to the country's authorities. He argued that many media sources follow "instructions from above" and are a subject to strict censorship.

In an interview with German radio Deutschlandfunk, Herles said that German journalists are not free to choose the stories and the way they want to cover them. The country's authorities put restrictions on many subjects and have forced the media to follow certain instructions, reminding the journalist of the times of Germany's division.

© Flickr / Carsten ten Brink
German Media Predicts Dire Consequences for Europe Amid Falling Oil Prices
In an interview with Wirtschaftswoche, former head of ARD TV channel Ulrich Wickert confirmed the fact that German citizens are losing confidence in the media. According to him, the media are in general a part of the economy and are, therefore, dominated by economic interests.

"Publishers have to consider [following issues]: How do I sell my paper? How much profit do I make?" Wickert said, adding that financial interests significantly infringe on the freedom of speech and the power of media as the Fourth Estate.

The journalist stressed that the main task of the media is to inform the reader so that he or she can form an opinion by themselves.

"But I observe a false understanding of tolerance and democracy, because some things are labeled as taboo. There are, for instance, moments when you have to admit that there were Algerian or Moroccan or Tunisian youths who behaved in a way we do not tolerate here in Germany," the journalist stated.

"The interesting thing is that they started to discuss problems in connection with people from North Africa only after the New Year's Eve in Cologne, because it proved to be a mass phenomenon. But then it suddenly turned out that it had been existing by us for a long time! However, earlier it was a taboo," Wickert stated.

© Photo : BRICS/SCO Photohost
Russia Media Create Freedom of Speech for the West – German Politician
Earlier, German journalist Udo Ulfkotte admitted that he repeatedly had to cooperate with the CIA and German intelligence agencies and was forced to put his name under biased publications under the threat of being fired.

In several media interviews and in his book, Ulfkotte revealed how German journalists and politicians were recruited as CIA assets to write stories that are aimed at serving the geopolitical interests of Washington, and not the interests of the German people.