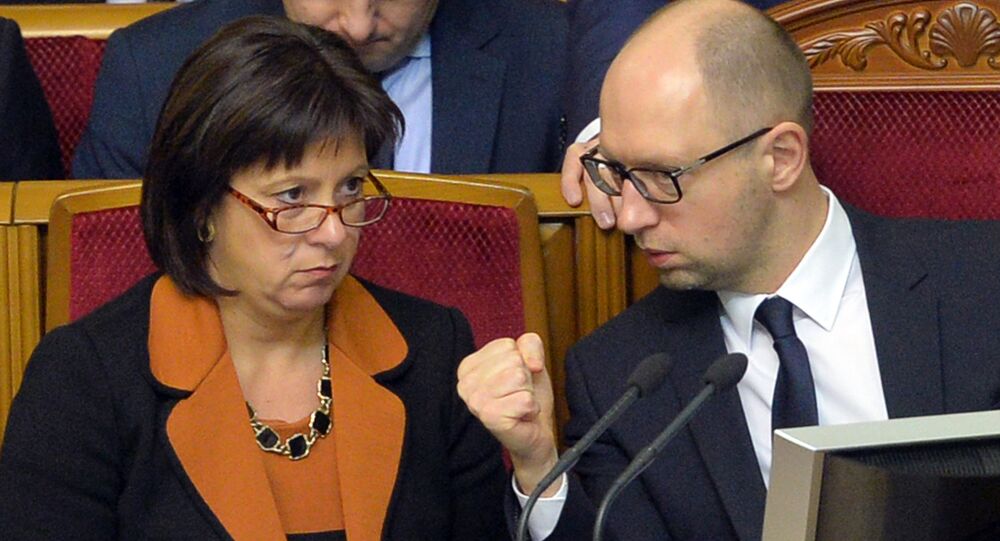 Either by malice or folly, Ukraine's government is attacking the country's economy on multiple fronts. Zealously stepping up the struggle against imported Russian goods, Kiev has simultaneously cut social benefits, raised tariffs, and proudly announced its adherence to an association agreement with the EU which could finish off the economy.

In the new year, in accordance with IMF loan conditions, authorities have extended cuts to the pensions of working pensioners, while those in the civil service won't receive them at all. Pilots, doctors, teachers, artists and social workers have lost the previously available benefit of early retirement. Meanwhile, beginning this month, assistance for single mothers and low-income families has also been reduced, via the transfer of responsibility from the national government to cash-strapped regional authorities.

© Sputnik / Valery Morev
Ukraine Introduces Measures in Response to Russia’s Free Trade Suspension
Furthermore, inflicting a blow against the nation's economy from the outside, Kiev has decided to join the Washington and Brussels-inspired economic sanctions against Russia, prompting Moscow to respond by banning the import of Ukrainian food products for six months. Kiev responded with an embargo against Russian food products.

More importantly, in connection with the stepping into force of the economic portion of Kiev's association with the European Union, Moscow suspended the CIS free trade area agreement with Kiev, depriving Ukraine of favored trade status in most of the former Soviet space. Previously, the Customs Union between Armenia, Belarus, Kazakhstan, Kyrgyzstan and Russia had constituted much of Ukraine's exports, particularly those which could not meet the stringent standards of the EU.

Interviewed by independent Russian newspaper Svobodnaya Pressa, Noginsky recalled that "the Ukrainian government  has boasted that since January 1st, [Ukrainian producers] have been issued more than 900 [EUR1] certificates," ostensibly providing Ukrainian companies with duty-free access to the EU.

"At the same time, Kiev is tactfully silent about the fact that most of these certificates were issued for raw, unrefined products. This includes things like apple concentrates, seeds, honey – that is, purely raw goods. As experts had earlier predicted, the certification of enterprises producing finished products is going ahead very slowly. In the last year, only eight companies were given such certification, and this despite the fact that they have been working at it for several years now."

© Sputnik / Andrey Stenin
The Three Stooges: Current Ukrainian Leadership Has Crippled the Country
"After January 1, these same producers lost the Russian market. For example, the meat and dairy industry will factually face crisis, since the main buyers of Ukrainian meat and dairy are Russia and the other countries of the Customs Union."

To make matters worse, asked about the consequences of the Ukrainian counter-counter sanctions banning Russian food products, Noginsky noted that such measures have only one purpose: "to see Russian goods replaced with European ones on the Ukrainian market."

"The government is factually just making it easier for European companies to access Ukraine, and nothing more. In order for companies to safely head to market, it is necessary to first remove any competitors and thus to free up the niche. As a result, people will be forced to switch to European goods. Factually, the Ukrainian government is working for the benefit of European producers, not their own citizens. European goods are more expensive, but due to lack of choice, naturally, people will buy them."

© AFP 2020 / TOBIAS SCHWARZ
Why Yatsenyuk's Sanctions Bill Against Russia Isn't Worth the Paper It's Written On
In effect, the expert says, "destroying our own exports is absolutely illogical, and is aimed at destroying Ukraine's economy and turning it into a raw materials-producing nation. What is Europe ready to buy? Raw, unprocessed goods. Our exports last year clearly demonstrated this, with corn, grains and ferrous metals serving as Ukraine's main exports [to Europe]."

"Only a few dozen Ukrainian companies will be able to receive these EUR1 certificates. The rest are simply incapable of doing so. The transition to the new standards requires significant investment. By the way, of those companies that did receive certification, eight have European owners, Danone being an example. In other words, the European owners have opened their factories toward exporting to their own home countries."

As for producers in Ukraine's traditional industrial southeast, Noginsky suggests that it is not certification, but the ban on trade with Russia which has hit them the hardest. "It's no secret that a significant portion of their output is related to the defense industry. The decision to stop the sale of dual-use products to Russia and the Customs Union has led to a stoppage and the factual destruction of many plants in Zaporizhia, Kharkiv, Dnipropetrovsk, and Mykolaiv. Europe is not going to buy any gas turbine engines, aircraft engines or turbines. They have their own excellent manufacturers, such as Siemens. They have absolutely no need for Ukrainian producers."

Ultimately, Noginsky laments, "all of these actions by the cabinet of ministers are aimed at the 'primitivization' of Ukraine's economy. It's almost as if they are deliberately attempting to destroy the working class and to turn Ukraine into a ruralized nation, because peasants do not protest. Apparently, the authorities are read up on their Marx."

The Three Stooges: Current Ukrainian Leadership Has Crippled the Country