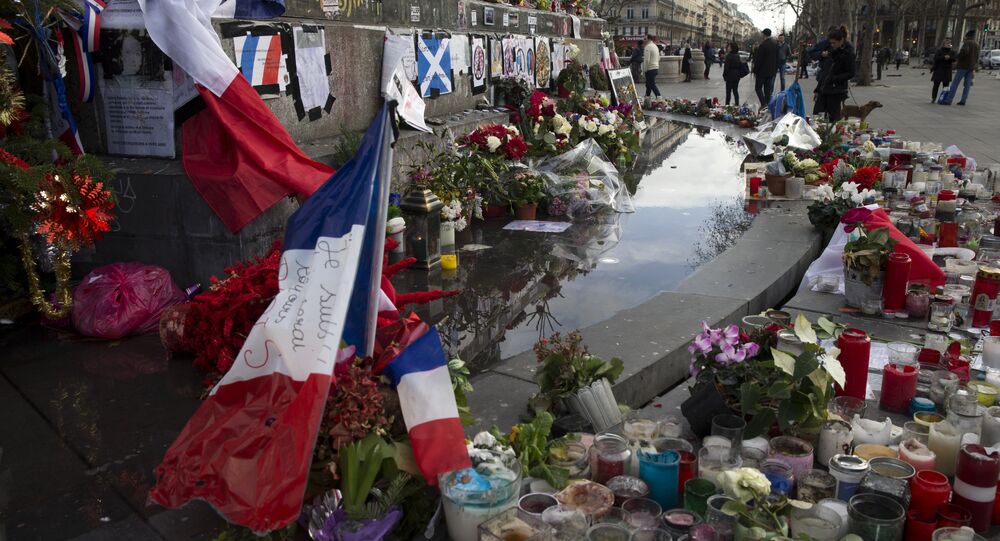 Series of Terrorist Attacks in Paris in January 2015 in Details

A series of terrorist attacks in the French capital began on January 7, 2015, when two gunmen broke into the office of the satirical magazine Charlie Hebdo, killing and injuring many people.

MOSCOW, January 7 (Sputnik) — The magazine has repeatedly published cartoons of Prophet Muhammad prior to the attack. According to eyewitness accounts, two masked gunmen, armed with Kalashnikovs and a rocket-propelled grenade launcher, shouted that the attack was "revenge for the prophet." The gunmen reportedly asked for the cartoonists by name before shooting them. The attackers fled by car, running down a pedestrian.

© Photo : Charles Platiau
Hollande Outlines Anti-Terror Plans on Anniversary of Charlie Hebdo Attacks
The attack left 12 people dead, including two police officers. Another four were staff cartoonists who went by the pen names of Charb, Cabu, Tignous and Wolinski. Over 20 people were injured.

Manhunt was launched for Said and Cherif Kouachi, the main suspects in the attack. They were included in the US Terrorist Identities Datamart Environment (TIDE).

Тhe third suspect was in the car waiting for the attackers. Subsequently, Hamid Murad, 18, turned himself in to police, claiming that he had an alibi. He said he was at school during the attack.

French President Francois Hollande declared three days of national mourning in memory of the victims of the attack.

On the night of January 7, four grenades were thrown at a mosque in the Sablons neighborhood in the city of Le Mans, western France. According to media, the attack took place at about 12:30 a.m. local time [23:30 GMT]. No injuries were reported.

© AP Photo / Michel Spingler
Widow of Charlie Hebdo Attack Victim Demands Deeper Investigation
On January 8, an assailant gunned down a female police officer and a street cleaner in Paris’s southern suburbs of Montrouge, fleeing the scene. The officer was killed and the man was taken to a hospital in critical condition.

On the morning of January 9, two men armed with automatic weapons stole a car in the Oise department. Later, the two assailants, who turned out to be the Kouachi brothers, took a hostage in the Seine-et-Marne department and tried to shoot their way out, killing two and injuring 20 people.

Later that day, the brothers holed up in Dammartin-en-Goele were killed by commando units and their hostage was freed.

On the same day, a man armed with two Kalashnikovs, burst into a kosher supermarket at Porte de Vincennes in east Paris, opened fire and took hostages. He was also the one to who was involved in the Montrouge attack.

The extremist said in a telephone conversation with a BFMTV reporter that he was acting on behalf of Daesh (Islamic State, outlawed in Russia among other countries) and coordinated his actions with Cherif and Said Kouachi, demanding their release.

At about 5 p.m. (at the same time as the operation at Dammartin-en-Goele), commando units stormed the supermarket, killing the assailant. He was identified as Amedy Coulibaly, 32. Four people were killed in the shootout, 15 hostages were released. All four were killed by Coulibaly.

© REUTERS / Youssef Boudlal
Highlights of Unity March in Paris Honoring French Terror Attacks Victims
On January 11, 2015, over 3 million people marched across France in memory of the victims of the terrorist attacks that shook the country. Some 50 international delegations joined French state and government officials in the march in Paris.

Nine people were detained in the investigation into the Charlie Hebdo attack. Later, five suspects were released.

On June 18, media reports revealed that Paris law enforcement detained two suspects in the Charlie Hebdo and kosher supermarket attacks. According to investigators, one of the detainees was linked to Coulibaly.

On December 15, French media reported two men were detained on suspicion of providing weapons to Coulibaly.

According to local media, French investigators found letters at Coulibaly’s home suggesting that he had received orders by email. An unidentified sender instructed the terrorist to "act on his own" and "act by simple and safe methods." The "instructor" did not tell the attacker what his targets should be, telling him to "rely on his own judgment" and that the terrorist attack could be carried out in a suburb rather than in the capital if that were easier.

In April, she called her family to say she was on the Daesh-controlled territory.

French Authorities Distance Themselves From Charlie Hebdo A321 Cartoons