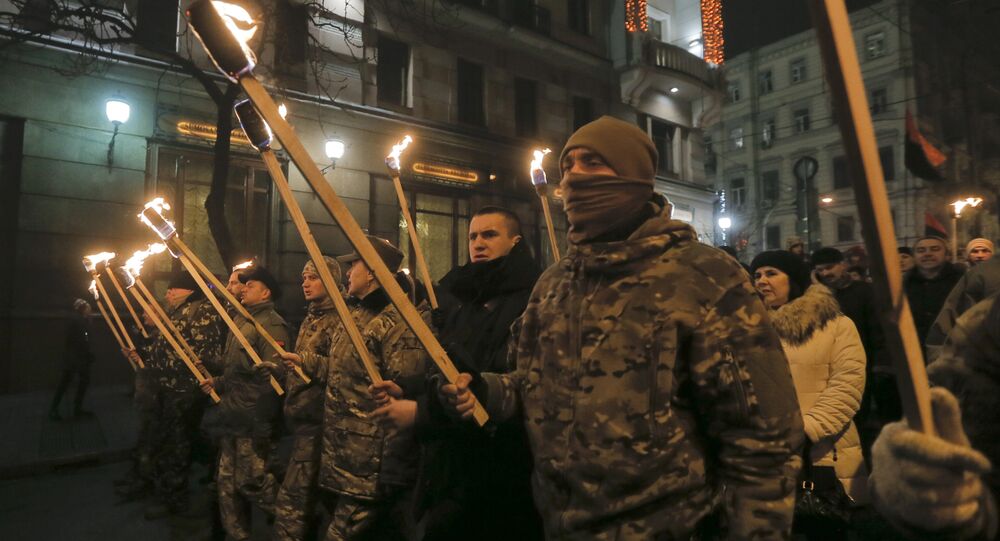 While the world is preparing to usher in a New Year with hopes of peace and stability, Ukrainian nationalists are planning to celebrate a Nazi collaborator as their hero and guiding light.

Stepan Bandera was the leader and ideologue of a Ukrainian nationalist militia during and after the Second World War that claimed to be fighting communists but joined the German SS troops to massacre Jews, Poles and other ethnic groups in pursuit of a "pure" Ukrainian state.

One of Ukraine's present-day nationalist parties represented in parliament, Svoboda (Liberty), is organizing a Nazi-style torch-lit marches in Kiev and Odessa to mark Bandera's 107th birthday on 1 January 2016. This will be a 10th such event and a third since the start of the EuroMaidan "revolution" in November 2013. For some reason, the Ukrainians call it a "revolution of dignity."

#Krasnoarmiysk residents talked about Stepan Bandera & decided to hold a march to honor him. https://t.co/Tlb9ltTRWt pic.twitter.com/sAvefzXIX7

​The celebration of Nazi collaborators in Kiev and Odessa will come just days after Ukraine's President apologized for their role in the Holocaust during a state visit to Israel.

Addressing the Israeli parliament, the Knesset, ten days ago President Poroshenko said: "We must remember the negative events in history, in which collaborators helped the Nazis with the Final Solution."

In Israel Poroshenko admits to Nazi collaborators. In Ukraine he still calls them heroes https://t.co/fyYnaa8T6N pic.twitter.com/XkkZ2omJQR

Poroshenko's apology for the crimes of Ukrainian nationalists of yesteryear "before the children and grandchildren of the victims of the Holocaust…" has invited a spate of vitriol from the nationalists of today.

"This kind of humiliation of Ukrainians has not been recorded in our history yet. During a visit to Israel, President Poroshenko apologized for the 'Ukrainian participation in the Holocaust,' " the leader of Ukraine's Radical Party Oleh Lyashko posted on Facebook.

To him this amounted to "belittling Ukrainians [and] proclaiming inferiority of his [Poroshenko's] people on the international level".

"No one accused the Ukrainian people of causing or creating the Holocaust. However, the fact is that there were Ukrainians who participated in the murder and persecution of Jews. They are worthy of condemnation."

But Ukrainian nationalists are doing exactly the opposite.

A video of an opposition lawmaker saluting Adolf Hitler made its way online right after President Poroshenko's apology in the Knesset.

​In the video, Artyom Vitko, the former commander of the Kiev backed Luhansk-1 "volunteer" Battalion and now a member of Lyashko's Radical Party, can be seen sitting in the back of a car wearing camouflage fatigues and singing along to a track extolling the virtues of the Fuehrer.

"Adolf Hitler, together with us, Adolf Hitler, in each of us, and an eagle with iron wings will help us at the right time," Vitko sings, saluting the camera with his water bottle as the car's sound system blares "Heil Hitler."

Ukraine is so illogical now that they've created a Saint and a Martyr out of a Nazi war criminal--Stepan Bandera. #MH17 #politics

​"The sight of a member of the Ukrainian Parliament singing a song praising Hitler, underscores the extremely deep problem in today's Ukrainian democracy regarding the ongoing efforts in that country (and elsewhere throughout post-Communist Eastern Europe, especially in Lithuania, Latvia, Estonia and Hungary) to rewrite the narrative of World War II and the Holocaust," Dr Ephraim Zuroff of the Simon Wiesenthal Center told Jerusalem Post.

"The fact that the Ukrainian authorities honor groups which actively participated in the murder of Jews during the Holocaust and glorify their leaders sends a message that delegitimizes the accurate historical narrative, and paves the way for disgusting scenes like this one. The Ukrainian leadership should not feign surprise or astonishment, they're the ones at least partially responsible", said Dr Zuroff.

Stepan Bandera had been designated a Hero of Ukraine by the previous pro-western "Orange" government ten years ago, and earlier this year, Ukraine's parliament has extended official recognition to other nationalist militias that collaborated with the Germans during the Second World War.

© AP Photo / Sergei Chuzavkov
Ukraine Recognizes WWII-Era Nazi Collaborators as ‘Freedom Fighters’
Asked about the decision to honor such groups, President Poroshenko told Jerusalem Post that the government was paying tribute to those who fought for national independence.

This is exactly the view promoted by radical nationalists who Poroshenko claims do not represent the powers that be. After the torch-lit marches in central Kiev and Odessa on 1 January they plan to hold a "conference" about Bandera's ideological legacy. The main question to be discussed at the conference says it all: how to use Bandera's expertise in fighting for independence to build a state with Ukrainian national identity.