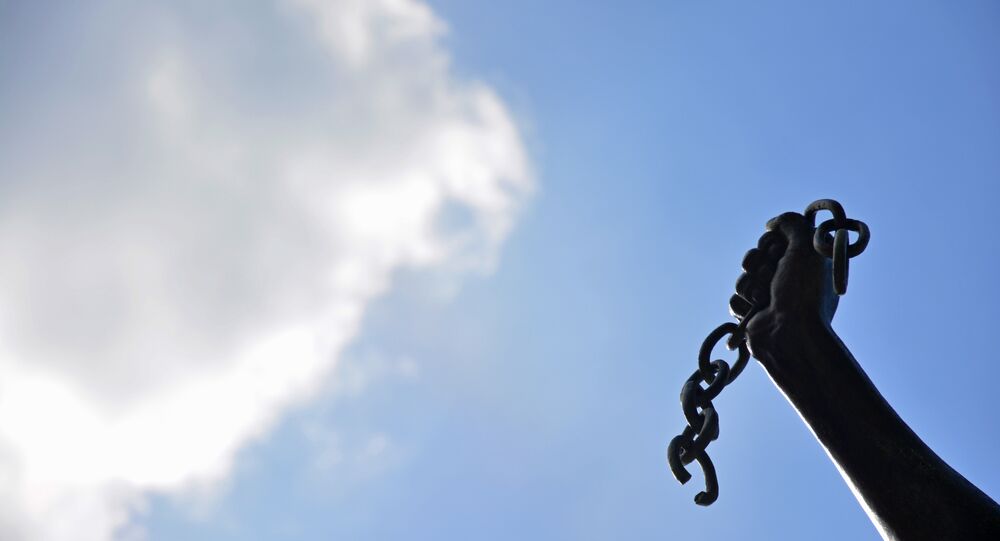 Anti-slavery campaigners have slammed the UK government's proposed immigration bill, saying it will give "unbelievable control to traffickers" and make it harder for victims to break free form modern day slavery in Britain.

© REUTERS / Suzanne Plunkett
UK Interior Minister Urges to Close Border to Jobless Migrants From EU
With the government's proposed immigration bill to have its first reading in the House of Lords this week, critics have argued that the plans will create a climate of fear around victims of trafficking, which they say will treat them as illegal workers rather than victims.

Many say that the crackdown on illegal workers in Britain, which carries a 12-month prison sentence and unlimited fines, could prevent victims of human trafficking from coming forward.

"We have serious concerns that the immigration bill will make people more vulnerable," Caroline Robinson, policy director of the Focus on Labor Exploitation (Flex) group, told the Guardian.

"The proposed legislation hands unbelievable control to traffickers. The purpose of this illegal working offence is to find people and get them out of the country and our fear is that victims won't want to come forward because of the immigration consequences," Robinson added.

​Robinson said that there was already evidence of people being too scared to come forward and report their abuse to authorities for fear of the repercussions.

"We worked with a cleaner [who was a victim of trafficking] who doesn't want to come forward because of the gamble that there will be immigration repercussions. Even when the Home Office agrees someone is a victim of trafficking there is not much support, so, after the 45-day recovery period, you are left destitute or forced out of the UK, with a very real risk of re-trafficking."

The concerns come after Prime Minister David Cameron promised to crackdown on illegal workers in Britain by "rooting out illegal immigrants and bolstering deportations."

If passed, the bill would place more pressure on banks and landlords to ensure their clients and tenants have a legal right to be in the UK, through regular checks of legal documents.

However, some have criticized the new proposals, with Chai Patel from the Joint Council for the Welfare of Immigrants, arguing that it will have a detrimental impact on trafficking victims.

.@FT – human trafficking on the rise in the UK https://t.co/sSlBJP532p pic.twitter.com/3l2CfbxhZh

​"It makes it a lot easier for wages to be withheld and the housing provisions will mean people are forced to deal with landlords who are criminals," Patel said.

"It's already a criminal offence to be here unlawfully but now the powers will be extensive. They can seize anything you earn, take whatever people have. Victims [of trafficking] will be admitting a criminal offence just by saying they have been exploited. That is what traffickers rely on and they can rightly say you can't tell anyone because you will be arrested and put in prison, and that is what might well happen. It really does contradict everything in the modern slavery bill," Patel said.

The government has defended its plans, saying that the immigration bill will not contradict protective measures in the Modern Slavery Act.

"The intent of the offence of illegal working is clear; it is not aimed at the victims of modern slavery. Anyone who is a victim of modern slavery can at any time report their captors, and last week the home secretary announced a specific helpline for victims to ring or text for help."

Despite the government's claims, anti-trafficking campaigners say the protection system is inadequate, with reports many victims of trafficking have still been forced to leave the UK.

Between January 2010 and September this year, more than 1,200 recognized victims of trafficking applied for asylum in Britain. Two-thirds were granted some form of permission to remain in the UK, while a third were forced to leave the country.

UK Wins Right to Discriminate Against Non-UK Citizens Over Welfare