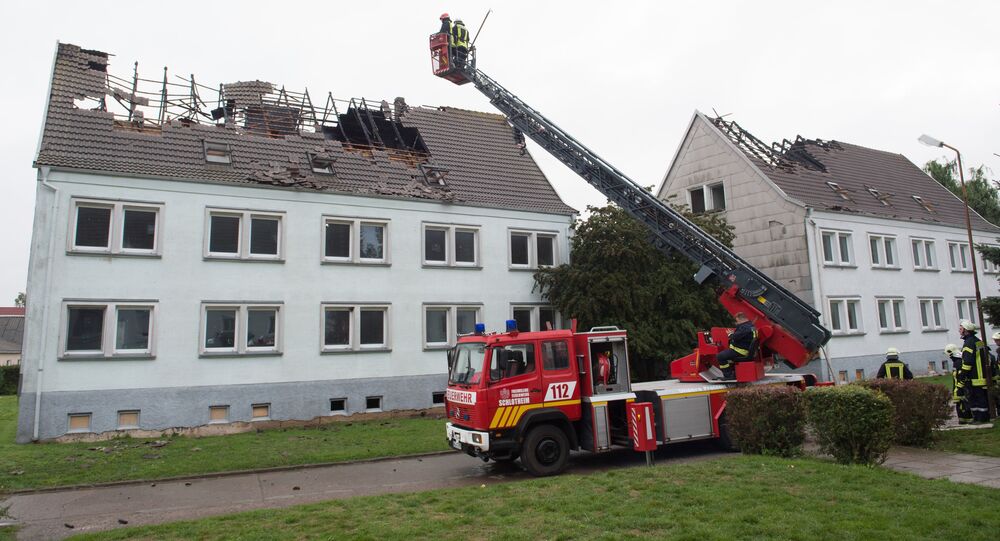 The issue of whether or not to provide thousands of refugees with permanent accommodation is almost sure to come to the fore in Germany in 2016; if the answer is yes, a construction boom may follow, according to the German news network Deutsche Welle.

© REUTERS / Hannibal Hanschke
Enough is Enough: Interior Minister Says Germany May Stop Accepting Migrants
The coming year will see up to 400,000 refugees look for free accommodation in Germany, where the authorities will certainly have tougher times ahead trying to resolve the issue, according to the German news network Deutsche Welle.

DW quoted expert Matthias Günther from the Hanover-based Eduard Pestel Institut as saying that at least 770,000 economy-class apartments related to the economy-class segment are slated to be constructed in major German cities before the end of 2020, a task that Deutsche Welle said is unlikely to be implemented.

As far as 2016 is concerned, a total of 270,000 such apartments will be built by the year-end, something that should prompt the development of a "large-scale social housing program," according to Thomas Bauer, head of the Confederation of the German Construction Industry.

According to Bauer, the construction in Germany of permanent apartments for the refugees to use shouldn't be ruled out because economically, providing them with temporary accommodations on a long-term basis is not feasible.

He added that spending a little more than 1,300 euros per square meter would already make it possible to construct normal residential buildings which will meet basic standards and will be serviceable for up to 30 years. In contrast, temporary housing will collapse in five years, Bauer said, adding that it would take about four months to complete the construction of a simple building without basements, designed for refugees.

"If we have a great demand in the segment of low-cost apartments for refugees, why don't we build in line with the  standards that were in place fifteen years ago?", he said, recalling that many Germans currently reside in such apartments.

Additionally, he called for significantly speeding up the process of obtaining construction permits, a task that Bauer said should be resolved at a political level.

According to Deutsche Welle, the IGBAU trade union, in turn, proceeds from the assumption that the government will have to allocate about 6.3 billion euros  in the next five years, and that it should reap 3.6 billion euros in the form of taxes.

© AP Photo / Michael Probst
Germany Hints at Reduction in Refugees as Merkel Fights to Regain Authority
Even though the money-related issues do matter, this is not the main problem, Deutsche Welle said, referring to the 1950s, when cash-strapped Germany managed to quickly provide millions of its residents with affordable housing. This was done thanks to a system under which the houses were built by private investors, with a certain percentage of apartments being rented in accordance with social tariffs, an experience that should be re-applied by the current German authorities, according to Deutsche Welle.

If the country's federal and local authorities promptly take all the necessary political and administrative decisions in the next few months, the spring of 2016 will see a new construction boom in Germany, this time in the budget accommodation segment, Deutsche Welle concluded.