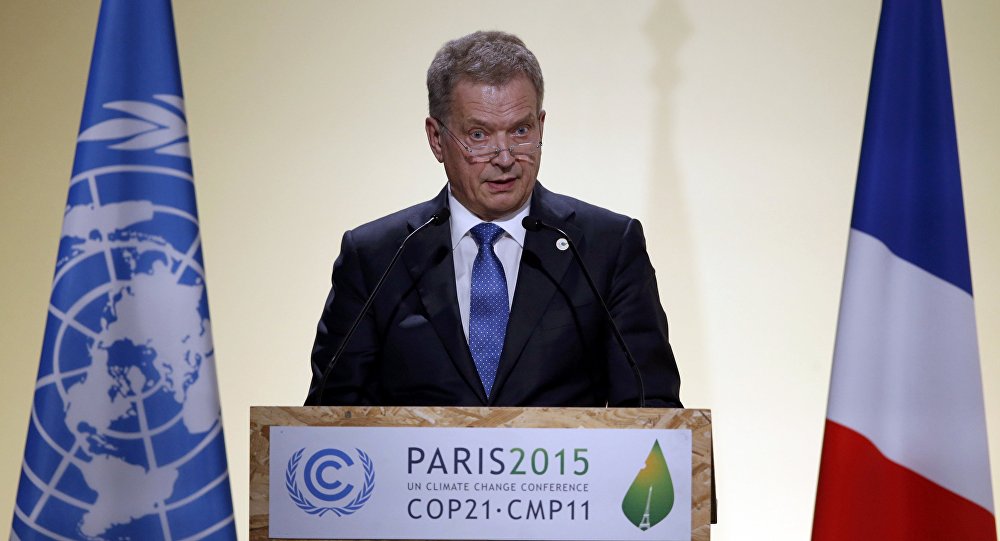 Finland's president, Sauli Niinisto, said that the law on countering climate change entered into force in Finland in June 2015, with the aim of reducing harmful emissions by 80 percent by 2050.

From November 30 to December 11, France is both hosting and chairing the Conference of the Parties to the UN Framework Convention on Climate Change. The event, which brings together some 180 states, is expected to result in the signing of a global agreement on climate change, introducing a legally binding and universal strategy on the issue, which is due to replace the 1997 Kyoto Protocol.

"Within the framework of the EU's objectives on greenhouse gas emissions, Finland intends to fulfill its objective of reducing emissions by at least 40 percent from 1990 levels, by 2030," Niinisto said during the conference.

© REUTERS / Ognen Teofilovski
Climate Change Pushed 125,000 Serbs to Brink of Poverty
According to him, the law on countering climate change entered into force in Finland in June 2015, with the aim of reducing harmful emissions by 80 percent by 2050.

Renewable energy's share of total energy consumed in the country is expected to increase by 50 percent by 2020, while the use of coal and oil will be halved during the same period, Niinisto said.

In recent decades, the Earth's mean temperatures have been rising — caused predominantly by human activity. Global warming speeds up the melting of glaciers and ice caps, which can lead to irreversible environmental changes and natural disasters.

The Kyoto Protocol committed UN member states to reducing their greenhouse gases emissions in light of global warming and to accepting the fact that a large part of problem was caused by man.