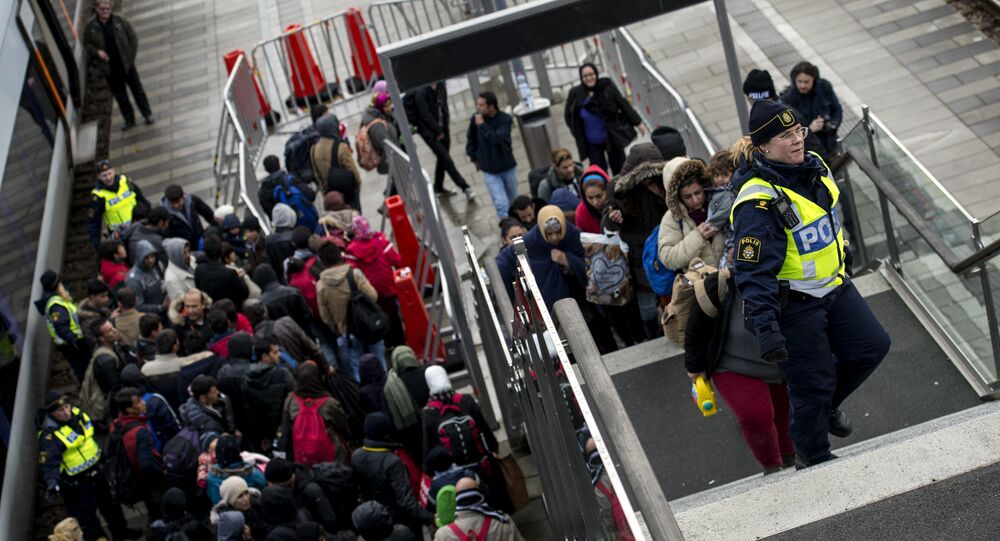 Denmark has become the latest country to refuse to rehouse any asylum seekers from Greece and Italy, backtracking on a promise made in September by Danish Prime Minister Lars Løkke Rasmussen to voluntarily take in 1,000 refugees.

"When we made the offer it was because we needed to solve what was viewed in Europe as the ultimate solution: that if you could distribute those 160,000, the problem would be gone. It is not," Rasmussen told broadcaster DR.

The Prime Minister told parliament that the decision to renege on a promise to take in 1,000 refugees was because of the sheer numbers of people arriving in Denmark on a daily basis. Danish National Police estimate that more than 10,000 refugees crossed into Denmark in the first week of November.

Border controls in effect between Denmark and Sweden. So sad to see so many refugees on the train, away from home with no belongings :-(

Rasmussen also hit out at other European countries that have failed to grasp a handle on the situation, namely Greece and Italy as a reason for going back on what he said.

"The assumption that they would be distributed was based on the fact that Greece and Italy had a control of the situation, but they don't."

Eight thousands refugees, migrants and asylum seekers arrive in Greece each day. The Greek islands are at breaking point and trying to cope with the number of risky rescue operations at sea, as well as struggling to process huge numbers of asylum seekers' claims.

Sakis Mitrolidis
A man from Iran with his mouth sewn shut takes part in a demonstration with fellow migrants and refugees as they wait to cross the border of Greece and Macedonia (also referred as Former Yogaslavia Rebublic of Makedonia) near Idomeni on November 23, 2015.

Hundreds of migrants have been left stranded on Greece's mainland border with Macedonia, where police recently repelled them with tear gas.

Lashing out at Germany and Brussels over the refugee crisis, Greek Prime Minister Alexis Tsipras recently told his parliament:

Thousands of migrants are making their way to Europe from the Middle East, Africa and south Asia, which according to former Greek finance minister Yanis Varoufakis, is threatening the future of the EU.

"Europeans are a people divided by a common currency. The euro crisis has fragmented Europe, turning Greeks against Germans, Irish against Spanish etc."

"It makes it hard for the EU to function as a political entity, as a unified entity. The centrifugal force of monetary union has made it harder to deal with the refugee crisis. In a sense, it is the straw that has broken the camel's back."

Europe's inability to reach a solution through consensus can be seen at every unofficial border with razor wire fencing; on the faces of migrants with their lips sewn together; and in scenes of refugees held in pens, being thrown food by riot police.

Tents to house refugees are being erected in Denmark, but the reality of the situation is biting and weather conditions worsen as winter approaches.

Denmark granted asylum to 6,703 people in July this year — more than the sum total for the whole of 2014. More than 10,000 refugees crossed into Denmark in the first week of November en route to Sweden, where 10,201 refugees applied for asylum.

The divisions in Europe on how to deal with the refugee crisis have been exposed, once again, with Denmark's latest decision.

As European leaders continue to bicker over quotas, numbers and borders — those seeking asylum in Denmark — men, women and children, living in freezing conditions, with nowhere to go, have become victims of a broken promise.