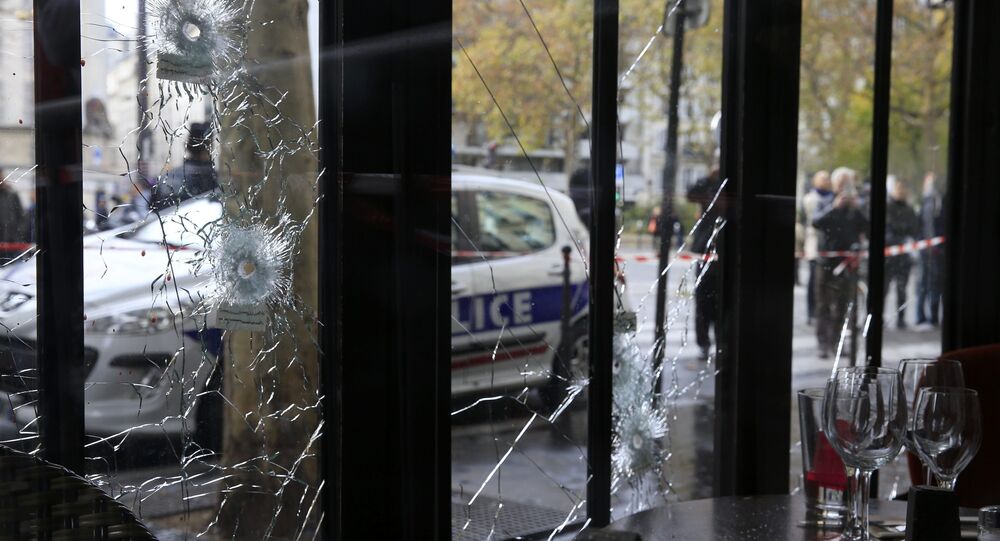 There Was Blood Everywhere: Eyewitness Account of Terrorist Attack in Paris

Russian photojournalist Victor Boyko became a witness to the tragic events that took place in Paris on Friday, November 13.

© REUTERS / Vincent Kessler
Death Toll Reaches 129 Following Paris Terror Attacks, 352 Injured With 99 Critical
Boyko also became one of the first photographers to provide pictures from the scene of the tragedy.

"I'm renting an apartment at Passage Amelot – that's where the back entrance to Bataclan is. I was going home and exited from the Republique subway station to take a stroll as the weather was nice," Boyko told Sputnik.

"Right then I saw a lot of police – I guess it was right when the attack was taking place. Apparently they weren’t aware of what was going on. I saw many police officers who, starting from the Boulevard des Filles du Calvaire, were stopping by every café and urging bystanders to go inside and get off the street."

"When I asked some English-speaking guy – my French is a bit rusty – what was going on, he replied "Oh, there are some people with Kalashnikovs."

According to Boyko, he reached rue Oberkampf and realized that he won’t be able to get to his apartment as men wearing body armor and armed with assault rifles were stealthily advancing towards the street he needed to reach.

© REUTERS / Kevin Lamarque
Obama to Convene National Security Council Following Paris Attacks
"I entered a bar on rue Oberkampf where my friends were, and from there we were watching the situation unfold. After about an hour a police officer entered the bar and urged us to leave the venue and to cross to the other side of the boulevard, towards Le Marais. I spent about two hours there, watching how the wounded were evacuated and the arrival of Hollande."

When asked how he was able to get so close to the scene of the tragedy, Boyko simply replied that he’s a photojournalist and that’s his job.

"When such things don’t concern you personally they don’t seem that scary," he added. "But when I got to my street and saw the bodies there, I became unsettled. The entrance to my apartment building was covered in blood; there was also blood on the elevator door handle; there was blood everywhere, and somebody’s shoes covered in blood were lying nearby. Later I learned that they belonged to my neighbor – he was helping the wounded and also got injured, so now he’s in hospital. So when you realize that these are all people who live next to you, that’s when you start feeling anxious."

Three of Eight Paris Attackers Came to France from Brussels