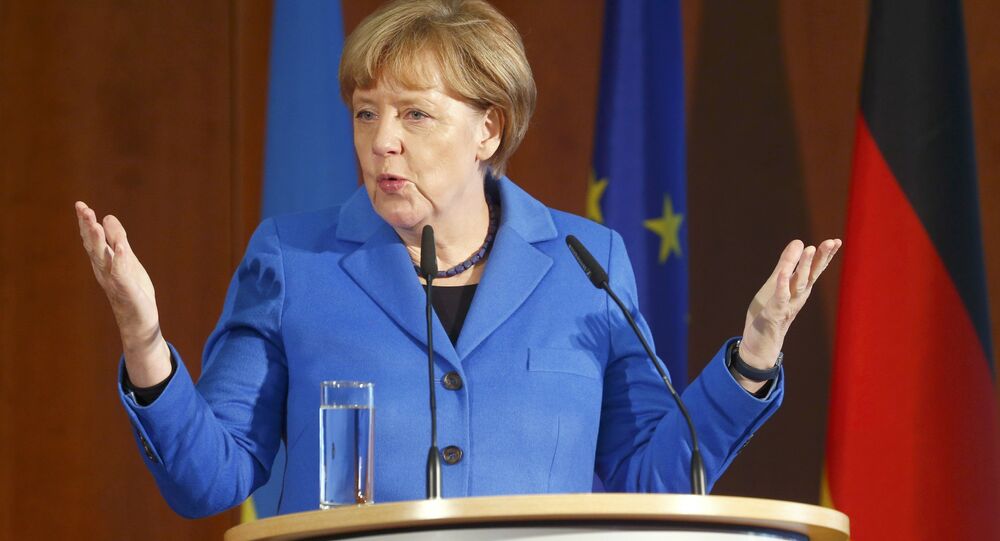 Angela Merkel is under fire from within her own grand coalition party as increasing divisions emerge over her handling of the asylum seeker crisis that will see more than 800,000 arriving in Germany by the end of the year.

Merkel caused consternation in August when she said Germany had open doors to refugees fleeing the Syrian crisis, which led to a mass movement of people across Europe, border controls being imposed and tensions mounting.

Some European leaders — such as Britain's David Cameron — said it was better policy to give aid and support to displaced Syrians — and others — in the refugee camps in the Middle East.

© AP Photo / Jens Meyer
Protesters demonstrate with a banner 'Refugees welcome!' in Dresden, eastern Germany, Saturday, Aug. 29, 2015. A refugee shelter was attacked by far-right protesters in Heidenau near Dresden over the last weekend.

Many agreed that her open doors offer had sent a strong signal to refugees from other countries — including Afghanistan — that Europe was open for business and that this had led to the mass movement of people risking their lives crossing the Mediterranean.

Others were critical of her suspension of the Dublin rules that say all refugees and asylum seekers should be processed at the point of entry into the EU, not at the destination country.

© AP Photo / Jens Meyer
Protesters hold a poster depicting German Chancellor Angela Merkel with pig-ears beside women in burqas during a demonstration of PEGIDA (Patriotic Europeans against the Islamization of the West) in Dresden, eastern Germany, Monday, Oct. 5, 2015.

She is facing huge domestic pressure within Germany after a rise in anti-migrant sentiment and anger at the huge number of people arriving all over Germany, putting the federal states under severe pressure as they struggle to cope with the influx.

Her personal handling of the situation has now led to a crisis within her own grand coalition party. Merkel is the Leader of the Christian Democratic Union (CDU) which is politically allied to its Bavarian sister party, the Christian Social Union (CSU), led by Bavaria's President Horst Seehofer.

However, with Bavaria blaming Austria for failing to control the flood of asylum-seekers turning up on the southern German borders — leading to Bavaria bearing the brunt of the crisis — the two parties are split over Merkel's stance on the refugees.

"We are in the midst of a real coalition crisis."

© AFP 2021 / Andreas Gebert
Merkel Under Pressure as Bavaria, Austria Trade Blows Over Asylum Crisis
"The relationship between the CDU and CSU is more difficult than at any time since 1976," he added, referring to the time the coalition lost the West German election that year, leading to a brief separation.

Seehofer has been critical of Merkel's open doors policy, which has led to hundreds of thousands moving across into Europe fleeing war zones including Syria, Afghanistan and Iraq. He has vented his anger at both Austria and Merkel over the crisis.

Seehofer set Merkel a deadline of November 1 for Berlin to take control of the border issue with Vienna, otherwise "we need to consider what options we have," he said.

Seehofer and Merkel are due to have talks Saturday October 31, with the German Chancellor fighting to keep the grand coalition together in a crisis many see as being of her own making.