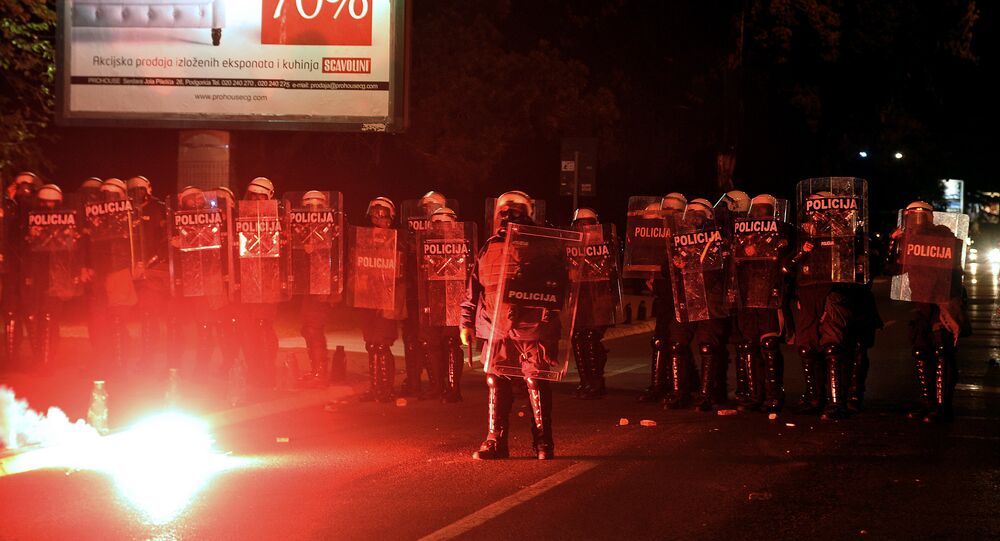 Six police officers and two civilians have been injured during an anti-government demonstration in the capital of the former Yugoslav republic of Montenegro, the country’s Police Directorate said.

BELGRADE (Sputnik) – Several thousand activists united in a coalition called the Democratic Front (DF) stepped out on Podgorica late Sunday to renew calls for the resignation of government.

Five policemen got minor injuries, another one was severely wounded, the Montenegrin Police Directorate said in statement.

Meanwhile, a protester got hit in the head by a stone, which was thrown by an unidentified individual at the police.

An editor of the Pink M local TV was slightly injured, as well while the crowd was throwing stones at the channel’s office, according to the statement.

Several government buildings were attacked in the course of the protest action. Separate groups tried to break through the cordoned area, throwing stones, burning flares, bottles and other items at police officers, the law enforcement agency stated.

The police department refuted earlier media reports that it used tear gas during the demonstration in Podgorica, saying that no coercive measures were applied.

#Montenegro Now. Protest is peaceful. Fascist mafia regime is in rule for 25 years. Will we see end to it? pic.twitter.com/JPwtEgZMDS

Montenegro Protests to Be Probed for Excess Police Violence