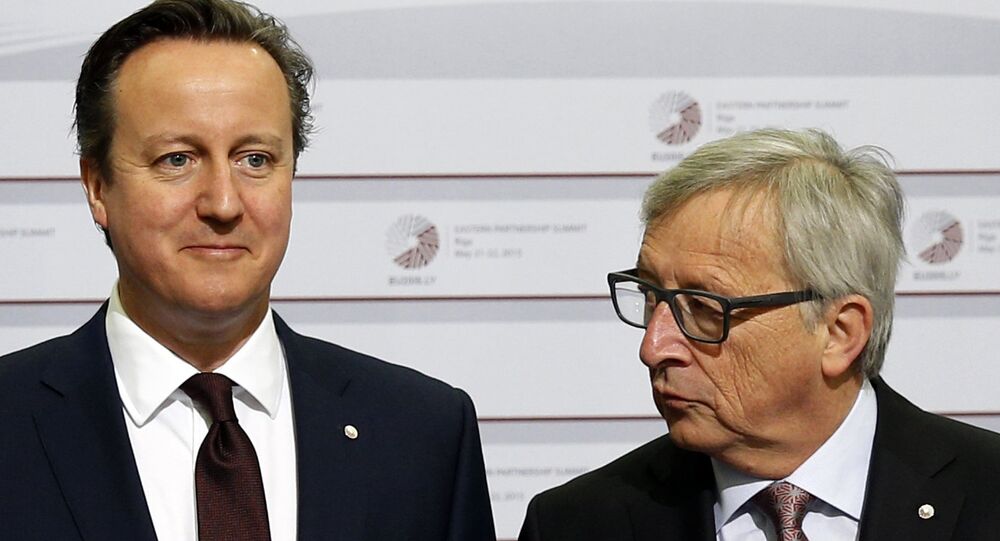 UK Prime Minister David Cameron is set to discuss Britain's membership of the European Union Thursday with European Commission President Jean-Claude Juncker - the very man Cameron said should not be in that role.

Ahead of the vote on Juncker's presidency, Cameron declared:

"Jean-Claude Juncker has been at the heart of the project to increase the power of Brussels and reduce the power of nation states for his entire working life. He is not the right person to take this organisation forward. So, I am very clear about the right thing to do."

He said Juncker was too pro-Brussels and his presidency would push for more powers to be centralized within the EU, warning:

"Everything has consequences in life. And obviously, I think proceeding in the way that countries are planning to proceed in choosing this individual is the wrong approach. I think that would be bad for not just [Britain], but all of Europe."

Cameron is facing one of the biggest political dilemmas for the UK in decades: how to keep Britain inside the European Union while also negotiating a series of opt-outs from some of the main pillars of that union.

The British prime minister has promised an In/Out referendum on Britain's membership of the European Union amid growing euroskepticism within the UK.

‘Britain Stronger in Europe’ launches with celebrities and a dose of patriotism http://t.co/EcSdBAPG3U #EURef pic.twitter.com/YHhVWCepw5

The anti-EU UKIP party polled third in the May general election — albeit gaining only one seat in parliament — and Cameron's own party is deeply divided over the issue.

'Britain doesn't need the European Union'. Retweet if you agree with Juncker! https://t.co/uIMJDOWkjR

"We all know what's wrong with the EU: it's got too big, too bossy, too interfering. But we also know what's right about it: it's the biggest single market in the world."

"Believe me, I have no romantic attachment to the European Union and its institutions. I'm only interested in two things: Britain's prosperity and Britain's influence and that is why I am going to fight so hard in this renegotiation, so we can get a better deal and get the best of both worlds," he said

On the general principle of more integration with in Europe he said: "Britain is not interested in 'ever closer union' and I will put that right."

© AFP 2020 / EMMANUEL DUNAND
Brexit Referendum May Take Place April-May 2016
His talks with Juncker — the former prime minister of Luxembourg — will be uncomfortable as Cameron objected to the European Commission president's appointment on the basis Juncker was too Brussels-centric and in favor of 'ever closer union'.

Thus, when the two men get together to discuss how to renegotiate Britain's membership of the EU, it is going to be a tricky conversation for both of them.

The waters were even more muddied Wednesday evening when Juncker was widely quoted as telling a group of people in the European Parliament: "I am 150 per cent in favor of having Britain as a constructive member state of the European Union. We need Britain," before adding…

"Personally, I don't think Britain needs the European Union. But as a matter of conviction others might have a different feeling on that."

Brussels bureaucrats dispute the meaning of the final remark which was quickly picked up on by UKIP leader Nigel Farage, who said:

"I want to buy Juncker some champagne. I have always had a personal liking for Jean-Claude Juncker even though we have political differences. His statement today that personally 'I don't think Britain needs the European Union' is spot on."