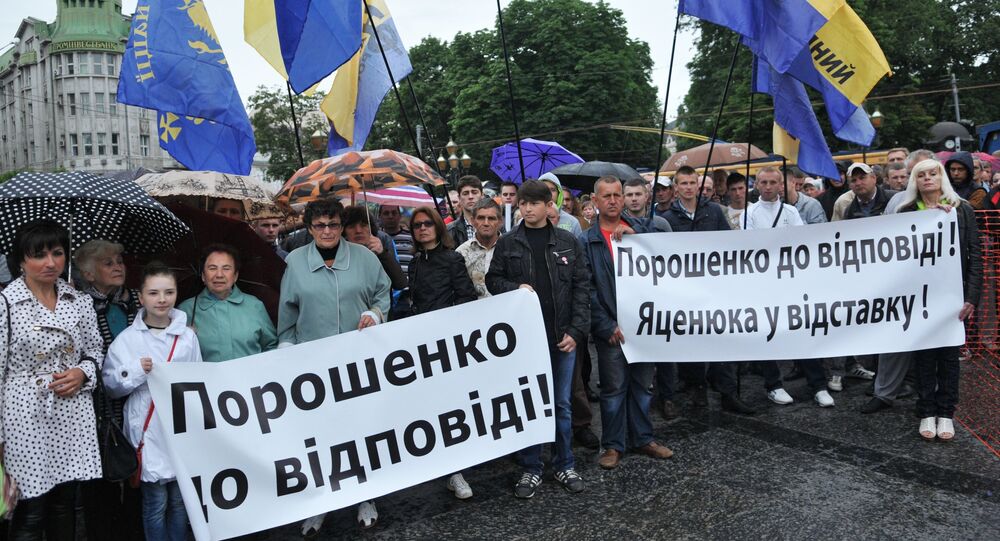 New Survey Shows Most Ukrainians Give Poroshenko a Big Thumbs Down

The majority of Ukrainians are disappointed with the current state of affairs in the country and their confidence in their political leaders has plummeted since last year, according to a new survey published by the Washington-based International Foundation for Electoral Systems (IFES).

© AP Photo / Evgeniy Maloletka
Majority of Ukrainians Fear Country Heading in Wrong Direction
The key findings of the 25th IFES annual survey in Ukraine, conducted in September 2015, have been published on the foundation's official website. Here are some of the more interesting insights.

The survey also revealed the “gradual decline in confidence in political leaders.”

This is strikingly lower than last year, when 69 percent expressed confidence in him in the September 2014 IFES survey.

Prime Minister Yatsenyuk has suffered from a similar decline in confidence, from 60 percent in September 2014 to 20 percent in this survey.

The head of UDAR, Klichko, has fallen from 43 percent in September 2014 to 25 percent in this survey.

The survey further finds that while most Ukrainians do not believe the aspirations of the Maidan have been adequately addressed by Ukrainian leaders.

© AFP 2020 / PATRIK STOLLARZ
Most Ukrainians Dissatisfied With Performance of Yatsenyuk, Poroshenko
The survey data indicates that the lack of positive changes expected to come into force after Maidan, combined with the economic situation in the country have contributed to a consistent, slow erosion in the initial positive momentum that was seen in Ukrainian public opinion on heightened hopes for political and social reform.

Given previous trends in public opinion in Ukraine, there is a danger that unless significant, concerted efforts are put in place to address issues of importance to Ukrainians, the momentum for meaningful reform as desired by the Ukrainian public may be lost and followed by the kind of cynicism and political disengagement that characterized public opinion in Ukraine before Maidan, the survey states.

The survey also finds that almost half of Ukrainians believe that the country would better off with closer political and economic relations with Europe than with Russia.

Over Half Americans Against Arming Ukraine – Poll