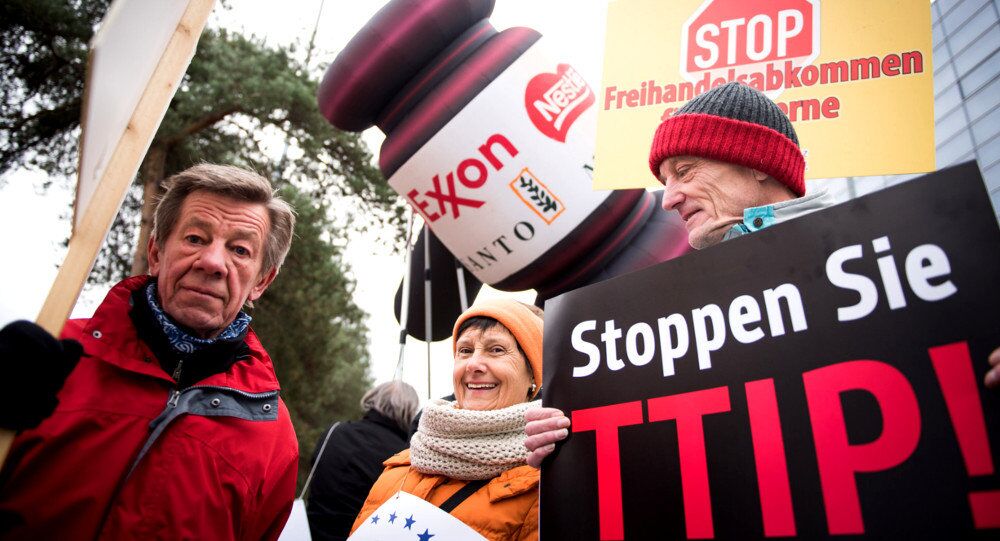 Some 100,000 Protest in Berlin Against EU-US Free Trade Deal

The number of people protesting Saturday in Berlin against the European Union’s controversial free trade pact with the United States has risen to about 100,000, local police reported.

BERLIN (Sputnik) — The protest targets the Transatlantic Trade and Investment Partnership (TTIP), which seeks to liberalize trade between the United States and the European Union.

The rally kicked off at 10 a.m. local time (8:00 GMT), organized by a broad coalition of 16 civil rights groups, trade unions and environmental organizations, such as the German Trade Union Confederation, Oxfam and Greenpeace.

"Currently, about 100,000 people participate in the demonstration. There have been no incidents during the protest," a German police spokesman told RIA Novosti.

It's hard to see, but there's a LOT of people protesting TTIP and CETA in Berlin today #gegenttip #NoTTIP pic.twitter.com/xFcJ2wFkJP

© Flickr / campact
After TPP: Three Million Signatures Trying to Stop Secretive TTIP Deal
The rally is patrolled by some 1,000 policemen and several helicopters, according to the German law enforcement.

Opponents argue that the proposed deal will water down standards and regulations on environmental protection, health and safety, and workers’ rights.