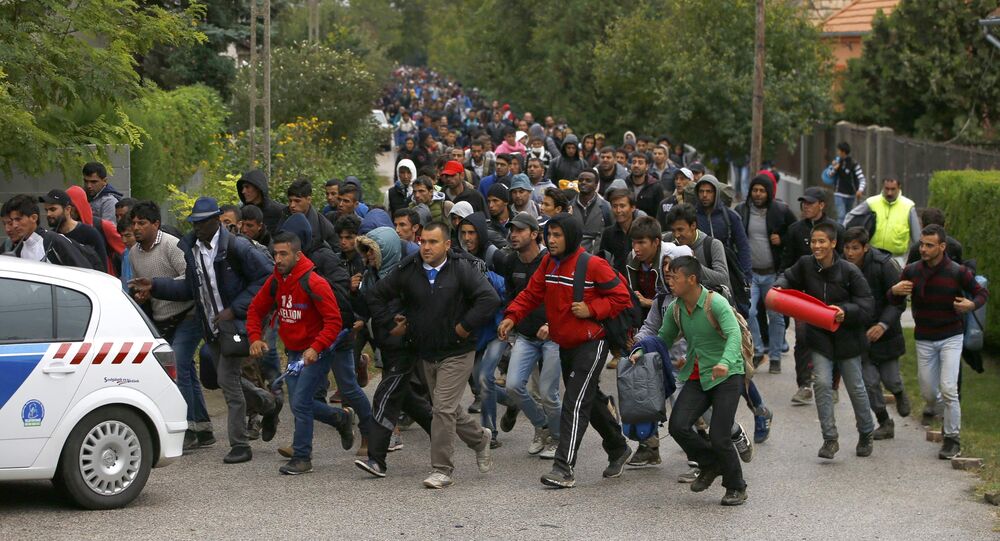 The European Union has displayed a complete inability to defend its external borders from hundreds of thousands of refugees pouring into Europe to seek shelter from conflicts in their home countries, Czech President Milos Zeman said Friday.

© AP Photo / Kerstin Joensson
German Hypocrisy Over Open Doors Policy Divides Europe
PRAGUE (Sputnik) – Zeman reiterated that European asylum rules require that a migrant apply for asylum in the first EU member state of their arrival, and said that "from that viewpoint, all the refugees are breaking the law."

The vast majority of migrants seek to reach Germany through the Western Balkan route, straining Hungary’s capacities. Over a quarter-million people are estimated to have crossed Hungary’s southern borders this year.

"The European Union has proven its zero ability to protect its outer borders," Zeman said at a press conference, as quoted by the Czech News Agency, after a two-day Visegrad (V4) summit.

The V4 format, which includes Hungary, Poland and Slovakia in addition to the Czech Republic, met in the Hungarian resort town of Balatonfured on Thursday to address the European refugee crisis. Croatian President Kolinda Grabar-Kitarovic, representing another European country that saw an unprecedented number of people cross its borders, joined the summit.

"EU border protection must be strengthened. We must introduce an [efficient] control of entry to the EU," Hungarian President Janos Ader stressed.

© AP Photo / Andrew Medichini
Refugee Resettlement Plan Puts EU Unity to the Test
Ader said that all the V4 nations agreed that Brussels must provide more resources for refugee camps in Turkey and other countries close to the points of origin of the largest numbers of refugees.

Croatia’s Grabar-Kitarovic underscored the need for Brussels to show solidarity with non-EU members, including Macedonia and Serbia, and "not slow down the process of EU enlargement."

The European Commission approved a $19.1-million assistance package for Macedonia and Serbia to cope with the migratory flow on Thursday.

EU to Create Return Office to Cope With Undocumented Migrants