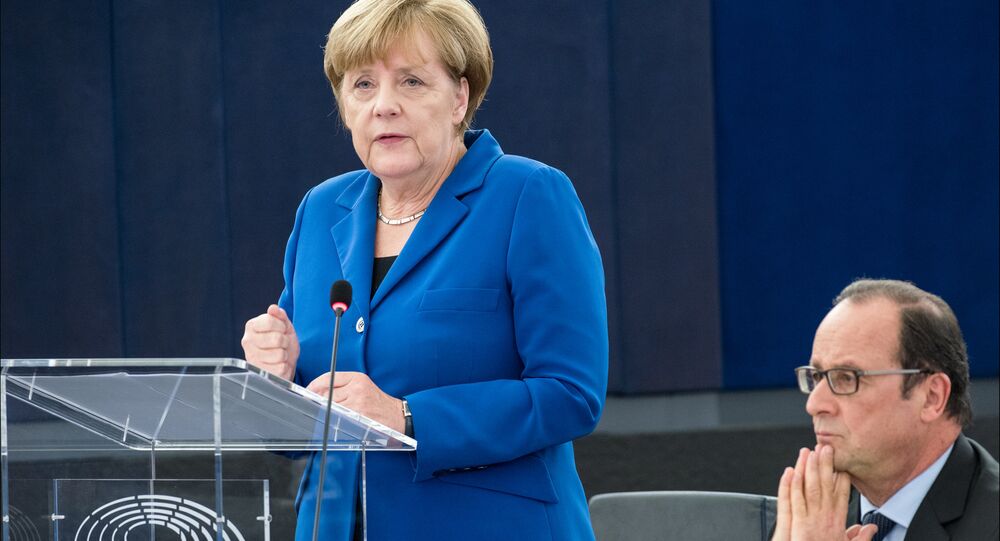 German Chancellor Angela Merkel and French President Francoise Hollande have been accused of representing "Old Europe" and creating a divided European Union which a lawmaker says should be run by 28 countries, not two.

Merkel and Hollande had been addressing the European Parliament, where they called for unity over the current migrant and refugee crisis which has caused deep divisions within Europe. Germany has drawn criticism for originally saying it would take in up to 500,00 — now possibly a million — refugees fleeing the warzones of Syria and Afghanistan, among other countries.

However, critics say this caused hundreds of thousands of refugees to leave their camps in the region and make the perilous journey across Europe, leading to hundreds being killed when boats capsized.

The tide of refugees led to some member states closing their borders, Hungary erecting a razor wire fence and a huge row over whether countries would be forced to take in a set quota of refugees. The crisis has called into question a central pillar of the European Union — freedom of movement of people — as well as the Schengen borderless agreement and the Dublin rules, which say migrants must be processed at the point of entry.

Hungarian leader Victor Orban and Slovak Prime Minister Robert Fico joined others in condemning Merkel for throwing open Germany's borders to Syrian refugees, saying she has triggered a surge of migrants that Europe cannot cope with.

"We must now resist the temptation to fall back into national government action. Right now we need more Europe! Germany and France are ready. Only together will we in Europe succeed in reducing the global causes of flight and expulsion. The Dublin process, in its current form, is obsolete."

Hollande said: "There is a humanitarian crisis which we need to confront, with an influx of refugees.. The only solution is a strong Europe.

"We need not less Europe but more Europe. Europe must affirm itself otherwise we will see the end of Europe, our demise."

However, the leader of the socialist GUE/NGL group, Gabi Zimmer — herself German — said:

"25 years ago your predecessors Chancellor Kohl and President Mitterrand took a joint initiative here to promote the European integration process against the backdrop of democratic movements in Eastern Europe. But times have changed. For many, both of you represent an 'Old Europe' that has failed."

She told Merkel that Europe had become an economically split union — epitomized by the euro crisis and bailouts for southern states.

"You shoulder a lot of responsibility that the Community method has been gradually replaced by the Union method. This had led to a division of Europe into politically and economically strong and weak member states."

"You say that the EU has led to more prosperity; no, recently the EU has increased poverty in the south and this has brought about a split in the EU. The people reject an EU where Financial Ministers now dictate how solidarity and living conditions have to be understood," she said.

"The Eurogroup has brutally blackmailed Greece."

The first Vice-President of the European Conservatives and Reformists group, Ryszard Legutko, told Merkel and Hollande: "Many have said today that your joint appearance is historic because it shows the Franco-German engine of Europe is still powering on and we have a radiant future in front of us.

"But don't you think that this is at least a part of the problem. That one or two countries decide for the rest? And we altogether are 28 and 28 is far more than two."

He singled Merkel out for particular criticism for being overbearing.

"Mrs Merkel, the events of recent years have placed a burden of leadership on your shoulders. Your critics say however — and they may have a point — that you sometimes forget the difference between leadership and dominance."

Europe's Refugee Plan: Papering Over the Cracks as Divisions Deepen

Merkel Under Pressure: France Calls For Reorganization of Europe