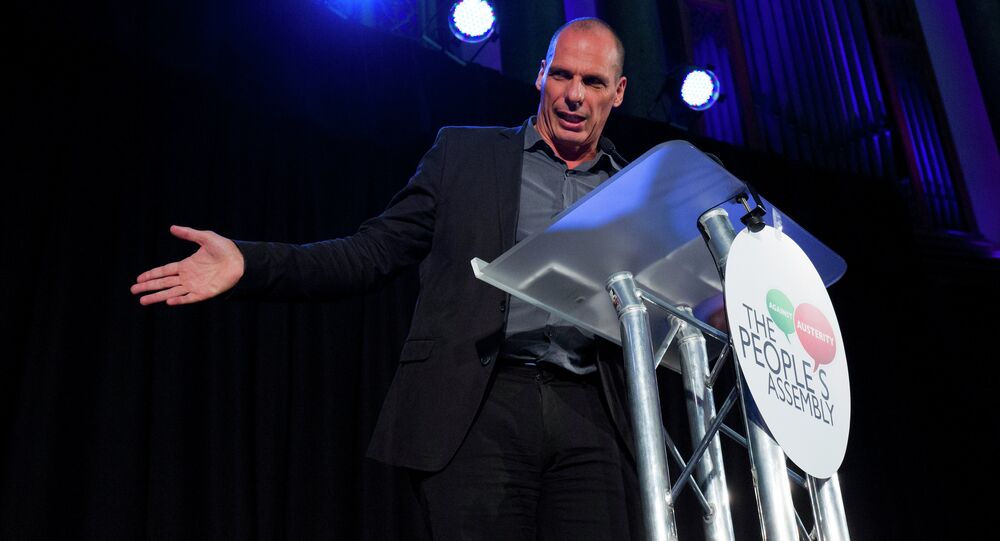 Former Greek finance minister Yanis Varoufakis has accused the country’s European creditors of engaging in "brutal politics" over their rejection of Athens' proposed economic reforms, saying that the rough treatment of Greece was used to warn Spanish voters from electing a left-wing government.

Speaking at a public meeting organized by the People's Assembly in London, Varoufakis said that the Troika's decision to reject the Syriza government's anti-austerity reform proposals had nothing to do with economics.

"During my time working in the Eurozone, I encountered combinations of irrationality and evil that it would be impossible to make up. These creditors were using this method of imposing debt on a country knowing that they would never get it back. Why? It was a demonstration to show the Spanish people what will befall them if they vote in a government that doesn't tow the line. It was brutal politics."

Varoufakis, who resigned from the Syriza party in July, has been highly critical of the actions of Greece's creditors — the International Monetary Fund (IMF), the European Central Bank (ECB) and the European Commission — for their insistence that Greece remained signed up to harsh austerity measures.

Varoufakis: "a 1% cut in public spending in the early 1980s saw unemployment hit 4 million in the UK". pic.twitter.com/MNOvoxcHRF

In particular, he accused German finance minister Wolfgang Schaeuble of bullying other leaders into supporting German-led proposals based on politics, rather than economic forecasting and evidence.

Following Varoufakis' resignation, and despite a referendum where the Greek people voted against implementing more austerity, the Alexis Tsipras-led Syriza government finally agreed to a third Greek bailout worth $97 billion (€86bn).

However, many critics pointed out that despite anti-austerity protestations from Greece's leader, the new bailout deal contained much harsher conditions for Greece to adhere to.

Message to Corbyn: Don't Be Worried About Fear

Varoufakis also paid tribute to Britain's new Labour party leader Jeremy Corbyn for pursuing an anti-austerity agenda, urging him, along with supporters Dianne Abbott and new shadow chancellor John McDonnell, not to be intimidated by the tactics of political opponents and some sections of the media.

"Your opponents, Diane, Jeremy, John, are going to use fear as their main instrument. They will say to you that a Corbyn government will push up the pound. This is what the systemic media will tell people in their living rooms."

"Don't fear them. People are perfectly capable of sifting through this. The people can overcome fear if the leadership overcomes fear," Varoufakis added.