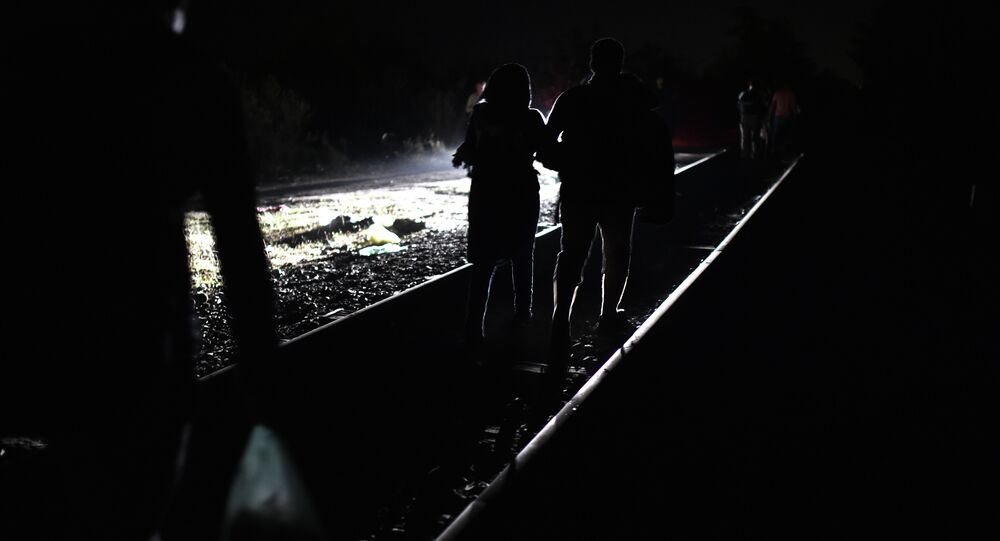 All Aboard the Orient Express: Legendary Train Leads Refugees to the West

The Orient Express, which once whisked well-heeled Europeans to Ottoman Constantinople in luxury, has been transformed by desperate refugees trying to take a safer route to Western Europe.

© REUTERS / Mohamed Azakir
UK Prime Minister Cameron Appoints Syrian Refugee Minister
The route of the Orient Express passenger train, once synonymous with opulence, has been transformed by the plight of refugees fleeing to the West from the wars which continue to rage in the Middle East.

The legendary passenger train service was first launched from Paris in 1883, and over the next century a variety of different lines linked major cities in Western Europe with Istanbul and other capitals in the East of the continent.

The last incarnation of the regular Orient Express passenger train service, which ran only from Strasbourg to Vienna, finally stopped running in 2009; the name is continued by the five-star Venice Simplon-Orient-Express, a privately run vintage train service from London to Venice.

© AFP 2021 / PATRICK KOVARIK
A picture taken on March 28, 2014 in Paris shows the locomotive of the legendary train the Orient Express, which is displayed in front of the Arabic World Institute for the exhibition "Once upon in time the Orient Express"
These days, rather than taking well-heeled patrons across the Europe, the tracks on which the original Orient Express train once ran now provide a guide for refugees from Syria, Iraq and other war-torn areas to make their way from east to west.

The train's route is looked upon by refugees and migrants as a safer course than traveling by road, where they run the gauntlet of heightened border patrols and often resort to relying on the services of people smugglers who charge extortionate prices for trips across European borders in trucks and vans.

The Balkan migration route, which leads asylum seekers from Turkey to Greece by sea, and then north through Greece, Macedonia and Serbia, is also seen as safer than the treacherous Mediterranean Sea passage; thousands of people have lost their lives trying to cross it this year.

The same course taken by the Orient Express is currently being used by tens of thousands of people each day, who either travel on the packed trains which run along the lines, or simply walk alongside the tracks, in order to make their way to the transport hubs of Budapest, Vienna, and Western Europe.

© AFP 2021 / DIMITAR DILKOFF
A migrant climbs through a window onto a train heading to the border with Serbia at the train station of Gevgelija, on the Macedonian-Greek border, on August 6, 2015
Mahmud, an asylum seeker from Syria, told Tanjug at Gevgelija, a train station at the Macedonian border with Greece, that he began his journey a month and a half ago, and had chosen to travel across Macedonia and Serbia rather than Romania and Bulgaria because he had heard it was a better route.

"I want a better life, and that's why I'm leaving Syria," explained Mahmud.

"In Syria there are very dangerous people, and people are dying every day," said Adam Elhadad, who is making his way across Serbia en route to Germany.

"On the other hand, in European countries like Serbia, Germany and others, people are very nice," said Eldehad, explaining that his group had sold all their possessions in Syria in order to make the journey to friends and relatives in Germany.