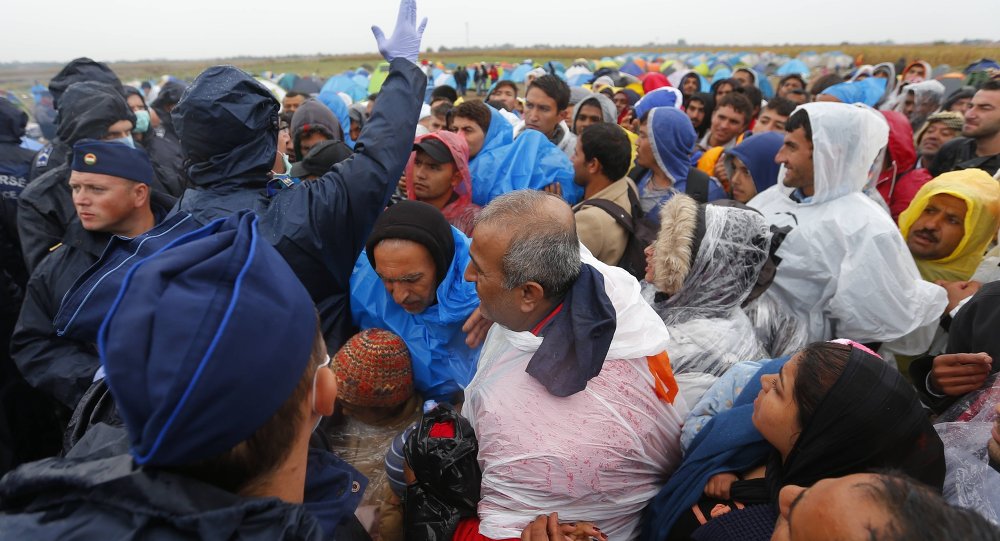 In another example of migrant-related brutality, police in Hungary have been caught on camera tossing food to a crowd of refugees in the Roszke camp.

Hungarian police officers have been filmed randomly tossing food at refugees gathered at a food bank in the notorious Roszke camp on the Hungarian-Serbian border.

The shocking video shows the policemen hurling bags of food into a shouting crowd, among them children waiting for the distribution of the aid.

The footage was first shared by Alexander Spritzendorfer, an Austrian politician whose wife, Michaela Spritzendorfer-Ehrenhauser, was in the camp and filmed the incident earlier this week.

The video comes just two days after a Hungarian camerawoman was sacked for deliberately kicking refugees who fled across a field from the Roszke camp.

The Hungarian authorities have repeatedly been blamed for the harsh treatment of the thousands of migrants and refugees who are making their way through Hungary in a bid to find better living conditions elsewhere in Europe.

this is how a refugee camp in the European Union looks like, European standard, Röszke Hungary. unbelieveable. 1 pic.twitter.com/WmIBpnEcRY

Tensions at the Roszke camp had been rising for days, and on Tuesday, scores of refugees burst through police lines to try to continue their journey to Western countries waiting to receive them.

Earlier, the UN refugee agency UNHCR also pointed the finger at Hungary for inhumane conditions faced by refugees there.

Since January, more than 150,000 refugees and migrants have reportedly crossed into Hungary from Serbia.