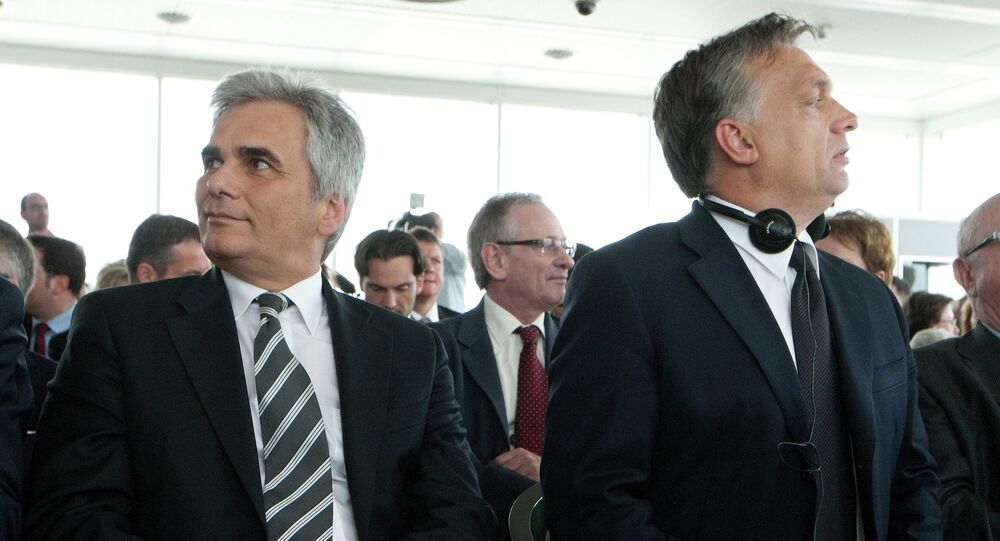 Austria Slams Hungary Over Its Refugee Stance, Budapest Strikes Back

In an interview for Austrian daily newspaper Osterreich, Chancellor Werner Faymann defended his country's decision to accept the refugees ejected from Hungary, saying it was a humanitarian imperative. He also offered harsh words for Hungarian Prime Minister Viktor Orban and the Hungarian government, accusing them of sowing the seeds of chaos.

© REUTERS / Kai Pfaffenbach
Thirsty for More? Germany, Austria Brace for Additional Refugees
In the interview, published Sunday, the chancellor explained that he made the decision to accept the refugees bottled up in Hungary out of an understanding "that we must set an example of humaneness, because one cannot leave the displaced persons standing before the lowered barriers in the pouring rain. The answer was clear: we opened the border as a symbol of humaneness." Faymann added that it was equally important that Germany did the same thing.

Faymann criticized Hungarian Prime Minister Orban, saying that "Orban told me and [German Chancellor] Merkel that he guaranteed that there would be no more than 4,000 [refugees], something which I did not believe from the beginning." It is now believed that at least 6,500 refugees have already crossed the border between Hungary and Austria.

Asked to respond to what his interviewer called the Hungarians' 'scandalous' behavior, Faymann noted that "a picture is worth a thousand words: one cannot solve the refugee problem with barbed wire." He added that "those who do not assist in resolving the refugee issue will have to reckon with the financial consequences in the future. Solidarity is not a one-way street."

© AP Photo / Boris Grdanoski
In Europe Refugees 'Will Go Through Windows if Doors Closed' - UN
Asked worryingly about what would happen if the majority of the refugees sought to stay in Austria, the chancellor noted that "this will not be the case; the vast majority want to continue on to Germany. Therefore the joint solution —that everyone who wants to can travel further can, was so important. I negotiated with Angel Merkel through the night, and am very grateful for her show of humanity. Factually, Germany and Austria have demonstrated for the first time that they could tackle the issue of refugees together."

Faymann emphasized that Europe as a whole needs to solve the refugee crisis, which he said was "the biggest crisis and thus the greatest challenge to Europe in its history." The politician noted that Europe's politicians would have to work together to create equitable quotas, to secure the EU's external borders and to set up emergency aid provision for the refugees.

The Austrian chancellor's commentary provoked a speedy response from Budapest: Hungarian news agency MTI quoted Levente Magyar, Secretary of State of Hungary's Foreign Ministry, as saying that Faymann was "blowing hot air, out of [his government's] inability to act on the immigration crisis." Magyar added that while the chancellor had taken it upon himself to step out as the 'defender of refugees', Austria was simultaneously putting pressure on other countries in order to prevent the influx of migrants to Austria. The official concluded that the chancellor's remarks were the latest in a series of speeches presenting Hungary in a bad light which, he stressed, does not serve the interests of maintaining good-neighborly relations between the two countries.

Magyar's remarks echo those of Hungarian Foreign Minister Peter Szijjarto, who stressed Saturday that the refugee crisis was caused by a "failure of the EU's immigration policy" and "the result of a series of irresponsible statements by European politicians."

Hungarian authorities made the decision to let thousands of refugees board buses and head for Austria and Germany on foot after nearly a week of unrest outside Budapest's central rail terminal, as well as several incidents of refugees breaking out from the camps which authorities had directed them to.

© Flickr / Mátyás Varga
Hungary Launches Anti-Migration Information Campaign in Countries of Origin
Hungary is presently one of the main transit points for migrants fleeing from war and instability-hit nations in the Middle East who are attempting to reach Western Europe.

Last week, Hungary completed the first stage of its 177 km-long fence with Serbia, ostensibly aimed at deterring illegal border crossings. With Budapest estimating that over 156,000 migrants have entered the country since the beginning of the year, Prime Minister Orban has warned that Hungary might also build a barrier along its border with Croatia, if undocumented immigrants begin arriving from that direction.