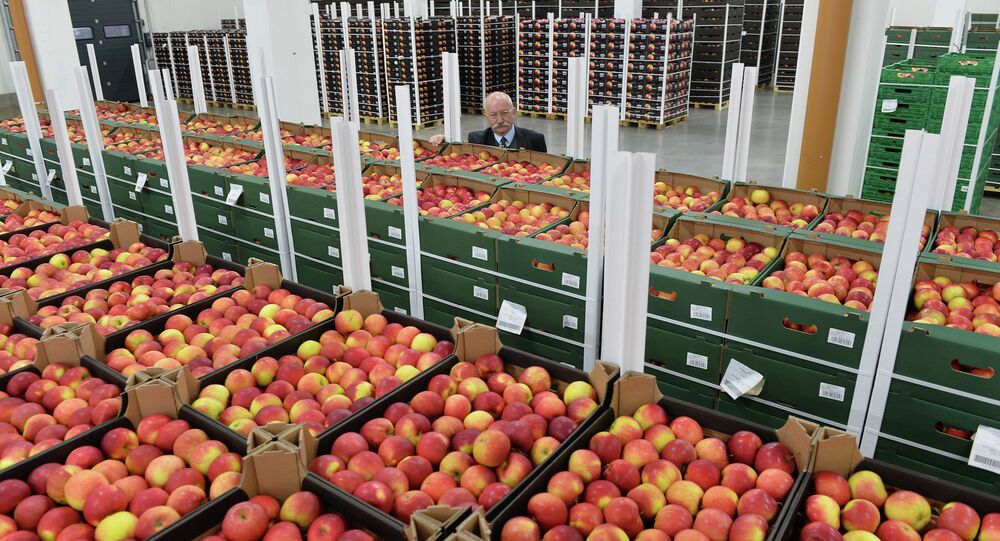 In an interview for Polish news website PortalSpozywczy.com, Roman Jagielinski, a former minister of agriculture and the current president of the Roja fruit company, admitted that Polish apple growers have been unable to find an effective replacement for their exports to Russia.

© Flickr / waledro
Russia Bans Polish Sprat Over Law Violations
Jagielinski told the newspaper that while Polish apple growers "are able to export apples to many regions of the world, to Western Europe or to distant markets, that fruit must be of premium quality. Nobody wants non-premium apples, but these are what is most commonly produced in Poland."

The farmer noted that in this regard, "the Russian market was unique in that it demanded slightly lower quality apples," adding that "due to the great volume we were shipping there, it is a market with no real substitute."

Jagielinski explained that unfortunately, if the Russian market remains closed for Polish apple growers, the only effective "alternative for lower class fruit can be processing, although there it will not be possible to obtain the same prices as it would be with [simply] exporting them," given the costs of setting up and running processing plants.

© Sputnik / Leonid Sviridov
EU Losing ‘Economic War’ With Russia – Polish Lawmaker
Furthermore, the farmer explained that even though growers are now attempting to modernize their production to produce better quality fruit, "it is impossible to completely eliminate non-premium class fruit. It can [eventually] be limited to 15-20 percent, but given the scale of Polish production, this is still a large amount."

Poland, Europe's largest producer, was hit hard by Russia's introduction of an embargo on several categories of European food products, a measure taken by Moscow in response to sanctions introduced earlier by the countries of the EU, the US, and several other countries over Russia's alleged interference in the Ukraine crisis.

Last summer, Polish and Western media went wild calling on Poles to "stand up to Putin" by eating "apples and drinking apple cider." Social media quickly jumped on the #jedzjablka ('#eatapples') hashtag, with hundreds of people posting selfies eating apples and washing them down with cider.

But the excitement soon died down, with farmers reeling from the loss of the Russian market launching protests and asking the state for assistance. Officials estimated that 1.5 million tons of apples, out of a total production figure of 3.2 million tons, were left unsold due to Moscow's counter-measures. Before the embargo, nearly 70 percent of Poland's apples went to Russia. Warsaw was forced to compensate growers out of the state budget, and an EU assistance program enabled the Polish government to purchase 15 percent of the surplus apples to give them away to charity.

Hinting at the corruption problems plaguing the Russian border service, which resulted in the Kremlin's decision to order the destruction of confiscated food goods last month, Jagielinski explained that in his case, while "the embargo was very annoying until January 2015, since then, the situation definitely changed. To our surprise, from January and February the eastern market began to operate, with exports [going] to countries where the embargo was not in force, mainly Kazakhstan and Belarus."

© Sputnik / Viktor Tolochko
Smugglers Who Moved $30.5 Mln in Embargoed Food Detained in Moscow
Over the past month, Russian and foreign media have carried out numerous investigations to find out how it was that embargoed food products continued to make their way into Russia,  determining that customs officials could be bribed to overlook discrepancies in country of origin labeling. Media reported that companies in Belarus, Serbia, Ukraine and Macedonia were involved in the practice of importing products from countries facing the embargo and re-exporting them to Russia on a large scale.

With Russia cracking down on re-exports and false country of origin labeling, and Moscow's countersanctions on food officially extended for a year last month, Jagielinski did not make clear whether and how much the measures threaten to affect his business.

While the EU does not publish figures on damages suffered from the loss of the Russian market, COPA-COGECA, a union representing the interests of over 28 million European farmers, has calculated losses by its members amounting to €5.5 billion, or roughly half of the value of its exports to Russia prior to the introduction of the embargo in August 2014.

Problem Solved: Poland Gives Away Embargoed Apples to US Army