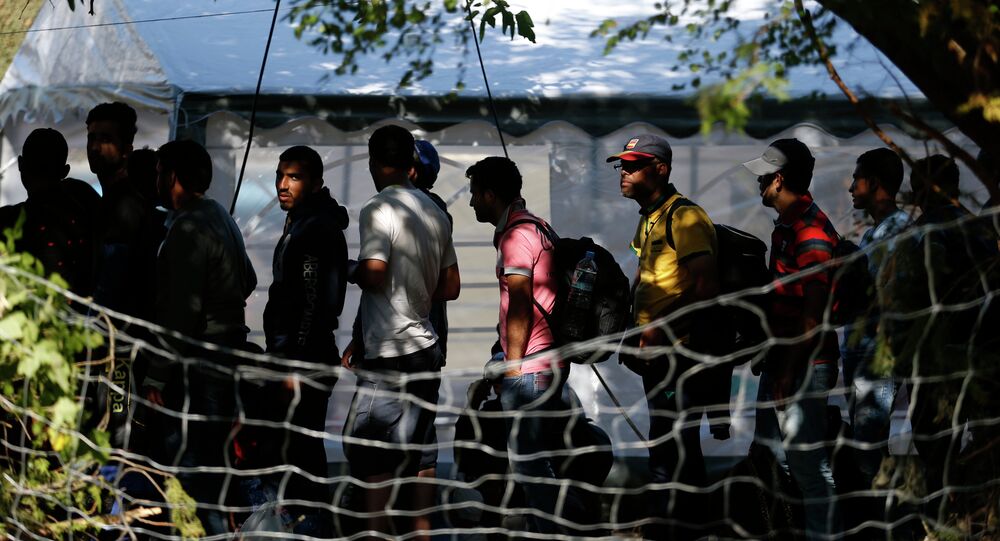 The ongoing migrant crisis in Europe would result in unrest and instability which could undermine the European civilization. As the EU is incapable to accept more immigrants, it is time to help the countries where they come from, Polish politician Mirosław Orzechowski said.

© AP Photo / Emilio Morenatti
EU Member States Should Choose Own Migrant Policies, 'Avoid UN-Like System'
Nearly 4,000 people have applied for refugee status in Poland since 2014, with only two of them have been granted the status.

Several dozen of the Ukrainian asylum seekers were ruled to be given various statuses which allow them to temporarily reside in Poland.

Earlier, from 2003 to 2013, only 663 Ukrainian residents applied for refugee status in Poland.

According to the EU rules, Poland has to accept asylum seekers. However, the question is what would be the consequences of such a policy.

"The consequences can be totally unpredictable. It is no secret they can be dangerous," Mirosław Orzechowski, a Polish politician and former lawmaker, told Sputnik Polska.

The case of Poland is different from the other EU country members, he said.

"One should clearly distinguish two problems – one is political asylum seekers, and the other is people who are forced to flee due to economic problems. Both questions should be understood and examined. We should bring help where it is needed," he explained.

According to the politician, currently Poland is totally unprepared to accept a great number of immigrants.

"Unlike France, Britain or Italy, Poland never started a war. Now, those countries are reaping the harvest of their previous actions. They are being flooded with immigrants who flee economic disaster and insecurity in their countries," Orzechowski said.

He underscored that there are over two million unemployed Poles and two million of migrants in the country.

© AFP 2020 / ATTILA KISBENEDEK
Over 2,000 Migrants Protest in Budapest Demanding Entry Into Germany
"If Poland agreed to accept a new wave of refugees it would be trapped. It is an extremely serious situation, and the country is not prepared," he added.

The recent clashes in Kiev and the rise of radicalism in Ukraine may provoke a new surge of Ukrainian immigrants to Poland, Orzechowski warned.

"As the situation in Ukraine is getting worse, Poland should be ready to deal with new Ukrainian immigrants. Many of them would try to find a job here, but some of them would become criminals. As human beings we realize the problem, but first of all Poland should take care of its own people," he said.

The European Union cannot further accept immigrants because it would destabilize the situation in its member countries, he continued.

"Unrest would spread across European countries and pose a threat for governments which once adopted a reckless liberal stance and decided to open the borders. The result would be the rise of radicalism in their societies," he said.

What is more, the current situation is already dangerous for the Schengen visa area, the politician added.

© AFP 2020 / CSABA SEGESVARI
Hungary Completes Building Anti-Immigration Fence on Serbian Border
"It was reported that Hungary is building walls along its borders. Rumors are that France is doing the same. All countries would build walls. If their governments do not, their residents would do that on their own. It would be a new way to protect their countries, their families and European civilization from refuges," he said.

However, the politician warned against demonizing refugees and called to help them in their own countries.

"No doubt, we have the right to protect our civilization. At the same time we mustn’t turn a blind eye to what is happening in other countries. We should do everything possible to make the situation better where the refugees come from," he said.

Migrant Flood in Germany as 2,500 Refugees Arrive From Austria, Hungary