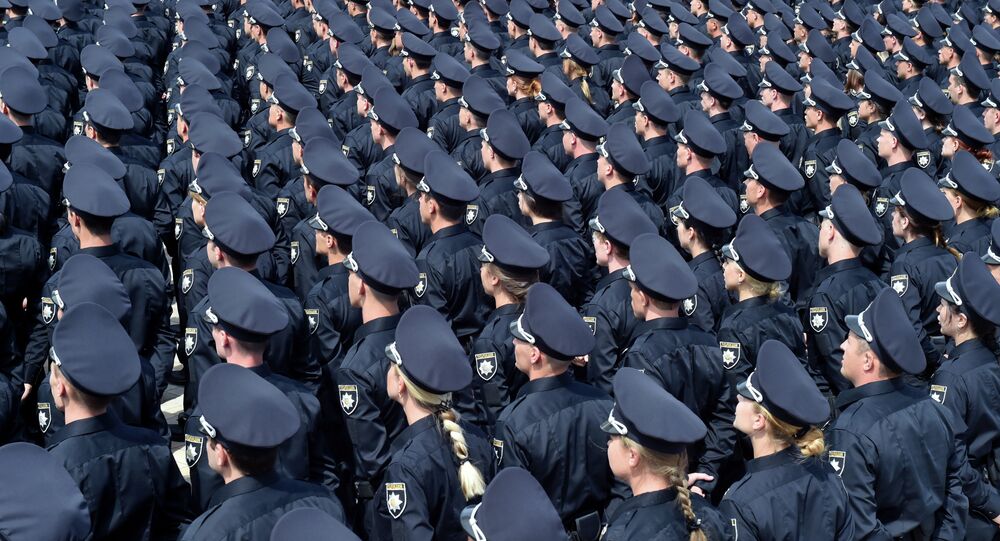 Kiev's efforts to rebrand the city's police force, including the hiring of thousands of young, photogenic officers, may have given the city a much-needed PR boost, but the new officers' inexperience has also led to a bevy of problems, ranging from improper filing of police reports to damaged patrol cars to difficulties in apprehending suspects.

With several hundred older officers forcibly retired or sent packing, the new police service also includes 2,000 new recruits, a quarter of them women. Aimed at fighting bribery and corruption, the new officers' salaries have been tripled, ranging from 8,000-10,000 hryvnia (equivalent to about $360-$450 US).

The new recruits are reported to have been trained by US and Canadian police trainers, and the project is being overseen by Deputy Minister of Internal Affairs Eka Zguladze, a former official in the cabinet of Georgian President Mikheil Saakashvili, who had launched a similar campaign in his own country nearly a decade ago before he was forced to flee the country in disgrace.

© AFP 2021 / SERGEI SUPINSKY
Ukranian police officers are sworn in during an official ceremony in Kiev, on July 4, 2015

The friendliness and 'photogeneity' of the new officers, trained 'to form relationships' with people while on patrol, has exploded on Ukrainian social media and in Western media, with Kiev residents stopping to pose for selfies with the new recruits, all smiles, and posting the results on Twitter, Facebook, VKontakte and Instagram, with hashtags such as #KyivPolice, '#MyNewPolice and '#SelfieWithACop' getting thousands of hits.

As the Social Media Hype Downs Down…

© Sputnik / Artem Kreminsky
Kiev Politician Furious Over Ukrainians Going to Crimea for Holidays, Wants to Make ‘Traitor List’
But as the success of the public relations campaign gradually wears off, Ukrainian media are beginning to challenge the organization and effectiveness of the reforms, first and foremost due to the new officers' inexperience.

On Monday, Ukrainian automotive news portal 'Road Control' reported that "Kiev courts have been turning down en masse" police reports issued by the traffic division of the new force, with officers committing a bevy of procedural errors. The site listed dozens of basic procedural errors by officers, from forgetting to state their names, to failing to fill in all the details of the motorists involved, to being unable to explain the reasons for a traffic stop, to forgetting to list the time and place of traffic incidents, and more.

The news portal angrily noted that as far as the reform of Kiev's traffic police is concerned, "it is clear now that the new personnel were only taught how to properly wear sunglasses and to be photographed with passers-by. Moreover, the task of the police appears to be to make 'glamorous' arrests, so that [Minister of Internal Affairs] Arsen Avakov and [Ministry of Internal Affairs' senior advisor] Anton Gerashchenko will have material to post on Facebook. However, all the police's bravado disappears when the cases end up in court. A lack of knowledge about the law and the rules of registering administrative materials leads to situations where real perpetrators can easily avoid responsibility."

© AFP 2021 / YURIY KIRNICHNY
Ukraine Already in Default – Ex-Minister
Furthermore, Ukrainian media have reported that the new officers had racked up over 700,000 hryvnia (nearly $32,000 US) in damage to nearly over a dozen police cars in less than a month of service, with one of the new officers telling Ukrainian news hub Obosrevatel that the accidents were caused not only by a lack of experience, but also by the long hours officers are forced to work (with shifts running 12 hours, and sometimes more).

The officer complained that the 3 days on, 1 day off schedule seems to be designed to exhaust the new recruits, with their rest time further reduced by the beginning of further training, which takes place on days off. The officer noted that she is "not going to quit, because I really like the job, but I do not understand why people working in an area with so much responsibility are being worked to the point of being worn out."

Video materials of the new police officers in action have also begun surfacing on YouTube, showing officers appearing unsure of themselves in their handling of street scuffles, one video showing a group of several officers unable to wrestle a drunk man to the ground, while another shows four officers in a standoff with a homeless man armed with a spoon for over five minutes as bystanders call for calm.

In a report for Spiegel-affiliated news magazine Profil published late last month, Kiev-based journalist Natalya Pavlova explained that that at present, "the new police officers are having to work in difficult conditions: they do not have experience, or support from the older policemen, nor even a full-fledged law aimed at regulating their activities. The draft law 'On the National Police' was passed by parliament back on July 2…but remains to be signed by Petro Poroshenko [who actually vetoed the bill earlier this month]. This means that the law is not yet in force, and that for three weeks now police have been performing their duties on the edge of the legal field, or even beyond it."

The draft law itself has also been subject to criticism, according to Profil, including for a provision allowing law enforcement to have multiple sources of funding (presumably including non-state sources), to the preservation of Soviet-style military ranks.

© AFP 2021 / SERGEI SUPINSKY
Ukrainian President Petro Poroshenko gives the thumbs up as he poses with newly graduated police officers during an official ceremony in Kiev, on July 4, 2015

With the Kiev pilot project already underway, Ukrainian media have reported that new officers are being recruited and trained in eight of the country's 24 provinces, with Zguladze promising that all cities with over a million residents will have their own 'boys in blue' by the end of the year, while academies are already training officers in Odessa, Lviv and Kharkiv.

© REUTERS / Alexander Ermochenko
8,000 Ukrainian Security Personnel Side With Donbass Forces
As to the new project's effectiveness, at least as far as increasing trust toward the police is concerned, recent polling by the web portal of news channel 112 found that only 26 percent of respondents had high hopes for the new police force, while 54 percent had 'no hopes of any changes' for the better, and 19 percent remained undecided. The poll seems to match trends reported by the public policy think tank Razumkov Center, which found in polling taken earlier this summer that over four in five Ukrainians do not believe that the government's efforts at fighting corruption are working.

Ultimately, only time will tell whether Kiev's police force (and those of other Ukrainian cities and regions, in the future) will be able to climb out of the swamp of corruption, instability and radicalism which have mired the rest of Ukrainian society, but if the country's top posts continue to be occupied by the same post-Maidan bureaucrats, and the economy remains dominated by oligarchic clans, lasting positive change seems unlikely.