© REUTERS / Peter Nicholls
London Tube Drivers on Strike Over Unsafe Trains
ATHENS (Sputnik) — The personnel of the Greek ANT1 TV, part of one of the largest Greek media companies, continue their two-day strike against recent mass layoffs which they believe to be connected with the new government bill obliging a TV channel to buy a broadcasting license, local media reported Saturday.

On Friday, the owners of the broadcaster announced they had dismissed over 30 employees from technical staff. The move was strongly opposed by the Journalists Union of the Athens Daily Newspapers, as well as the Union of the technical staff of private television channels.

Shortly after that, ANT1 employees stopped their work, and gathered outside the channel’s studios in Spata, outside Athens, in order to protest against the layoffs, according to the Greek Reporter newspaper. 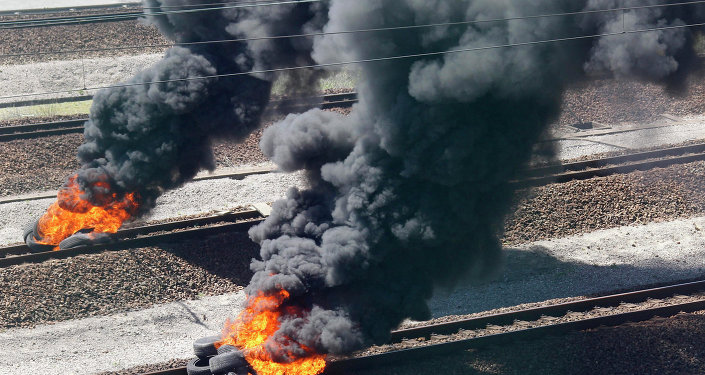 © AP Photo / Michel Spingler
Striking French Ferry Workers Shut Channel Tunnel to UK, Set Tires Ablaze
The Greek TV has long been working without a permanent broadcast license, using temporary permits. To date, the broadcasters owe insurance funds immense sums, and the government is considering a bill under which all Greek TV channels would have to bid for a license, to pay for the frequencies, as well as pay all the taxes.

In turn, the Greek government promised that the new initiative would work "in compliance with the law," and the employers would neither expose its employees to extortion and intimidation, nor exploit the bill as an excuse for layoffs.

Over 1,000 Employees of New York Airports to Go on Strike

Over 60 Flights Canceled in Rome Airport Over Alitalia Strike