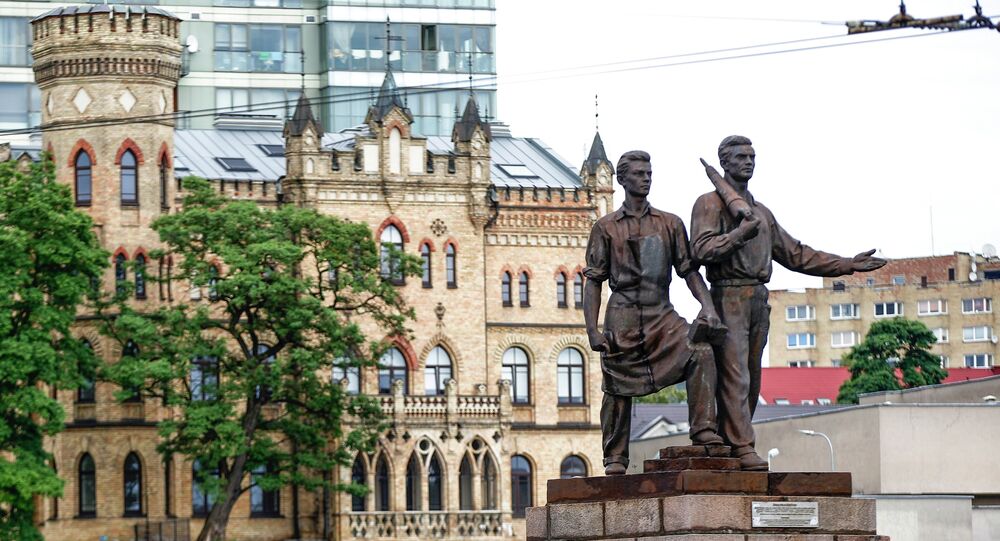 Authorities in the Lithuanian capital of Vilnius have taken a clever approach to erasing elements of their country's past from public memory, making plans to remove a series of Soviet-era monuments from a bridge in the city center 'for repairs'; some local residents fear that once the monuments are taken down, they won't be put back in their place.

© AP Photo / Mindaugas Kulbis
Drills Galore: Lithuania, US to Hold Over a Dozen Joint Exercises
Connecting Vilnius's historic city center with the neighborhood of Snipiskes is the Green Bridge, built in 1952 by Soviet military engineers to replace the old bridge, destroyed by Nazi forces during the Second World War. The bridge features four sets of monument-like sculptures by Lithuanian sculptors, including Soviet and Lithuanian People's Artists Juozas Mikenas and Bronius Vishnyauskas, featuring pairs of workers, farmers, students and soldiers. The monuments are considered prominent examples of a Soviet style of realistic art known as socialist realism.

Subjected to years of back and forth debates about whether or not to remove the statues from the bridge following Lithuania's independence from the Soviet Union, the monuments have once again become the center of an emerging political scandal. The city's new, moderate nationalist Mayor Remigijus Simasius has recently announced that the aging sculptures pose a danger to passersby, and will soon be removed for restoration. However, as noted by popular Lithuanian news hub Delfi.lt, the statues' defenders fear that once the monuments are removed, city authorities will cite lack of funds to restore them and put them back in their place.

Since 1997, the statues have been listed objects of Lithuania's cultural heritage by the Department of Cultural Heritage. This means that to remove them permanently, city authorities would require the permission of the department. Failing this, the mayor's office will formally only have the right to temporarily dismantle the statues, pending future restoration. Commenting on the situation in local media, the Department of Cultural Heritage has stated that the question about what to do with the sculptures will be decided only at the end of August or in the fall, even though work to begin removing them is set to start any day now.

Wikipedia
Vilnius's Green Bridge, built in 1952 by Soviet army engineers after the old bridge was destroyed by Nazi forces during the Second World War. The bridge features four sets of monuments in the socialist realis art style, created by famous Lithuanian sculptors.

© Sputnik / Alexey Filippov
Lithuanian State Security Warns Citizens Against Cooperating With Sputnik News
While some Vilnius residents would be more than happy to remove the symbols of the 'legacy of communism' and the 'Soviet occupation', others, including elements of the city's intelligentsia, historians and the city's Russian minority, say that the monuments are an indelible part of the city's history, and therefore deserve to be put back in their place following restoration.

Commenting on the situation for the Russian-language edition of DW, local resident Dariusz Malinowski stated that "the statues are a part of our heritage, even if it is from the Soviet era. Those who shout that it is necessary to demolish and forget everything Soviet do not give a thought to the fact that this way of thinking would erase a huge chunk of Lithuania's history."

Speaking for Gazeta.ru, Lithuanian architect Julius Narkunas noted that he has "no idea why authorities have decided to remove these monuments now. Public opinion in this respect is divided in Lithuania. Some speak out aggressively against everything that is in any way connected with the Soviet era. Others look at the monuments more calmly and realize that the city and its people must hold on to their history…In general, ideologizing the city's architecture is foolish. The sculptures will not enable us to change the past, but will help us to remember it. In general, as a resident of Vilnius, I cannot imagine the bridge without these sculptures."

With most of the country's Soviet era monuments already long-gone, Narkunas compared the Green Bridge monuments with the Berlin Wall: "Everyone in Berlin rejoiced after the wall's fall, but they kept a piece of it for memory. I think the same should be done with the monuments to the Soviet period in our city."

Meanwhile, Lithuanian Union of Russians MP Larisa Dmitriyeva stated that the idea coming from the mayor's office is "an act of ignorance," noting that "it's a Bolshevik kind of logic to seek to just demolish everything," and adding that following the mayor's logic, "our Supreme Court building would have to be demolished as well," given its association with the Soviet past.

Drills Galore: Lithuania, US to Hold Over a Dozen Joint Exercises