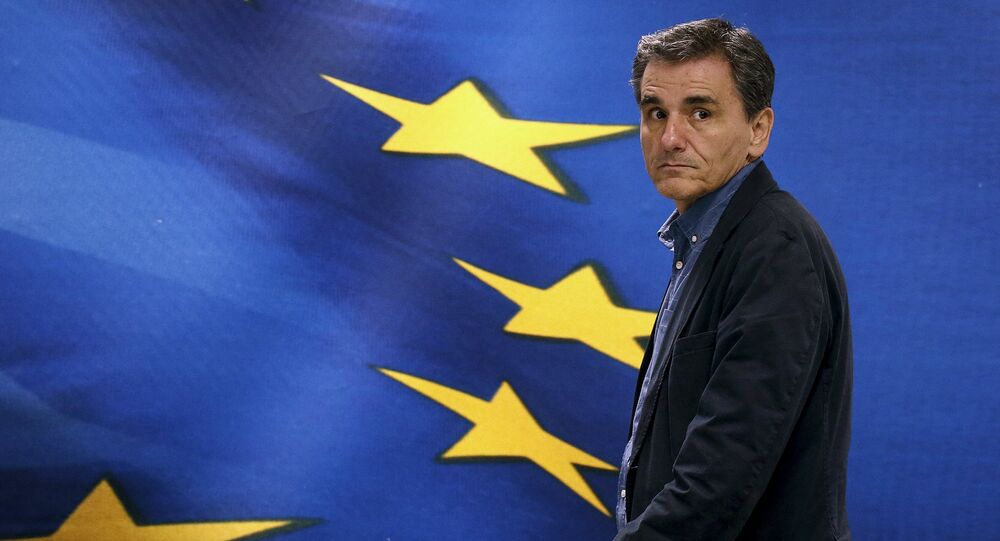 Germany and France turned up the heat on Athens Sunday, warning that Greece could be temporarily forced out of the euro and see its banks going under if it failed to meet the EU’s austerity demands before Wednesday.

© AFP 2020 / ARIS MESSINIS
Snap Elections Possible if Greece Fails to Agree With Creditors - Minister
Talks in Brussels between Greek Prime Minister Alexis Tsipras and European leaders dragged past a self-imposed weekend deadline and beyond dawn Monday without an agreement that would give the Greek leader a rescue package to prevent his banks from collapsing.

The Greek leader dismissed the Eurogroup’s draft as “monstrous” and requests more money in addition to a three-year, 53.5 billion-euro financial package for the country to stay solvent.

He also demands a restructuring of the country’s 320 billion-euro debt. The creditors are demanding tough austerity measures in exchange for Greece's third bailout in five years.

Without a deal, Greece faces an almost inevitable collapse of the banking system, which would be the first step for the country to fall out of the euro.

Germany’s Der Spiegel described the EU pressure on Athens as “intentional humiliation,” and the Eurogroup demands as “a shortlist of crimes.”

“The European Idea of Auschwitz, or the Germans Are Back,” Attica deputy governor Spyros Tsokas wrote in an article, carried by a Syriza party newspaper.

The EU is gradually being turned into a “German Europe” with a New Order being established across Europe, he added

“What the Germans failed to bring in during the war they are trying to do in peacetime with their friends, so high-nosed and arrogant. What we see happening in Greece now is social Darwinism or cannibalism at their worst,” Spyros Tsokas wrote in conclusion.