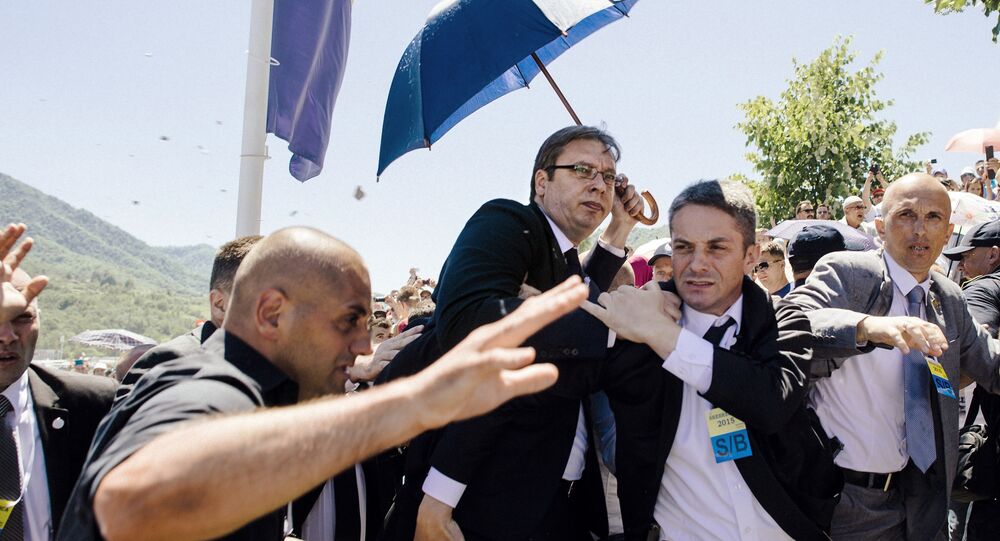 The attack forced Alexander Vucic and the Serbian delegation to flee the ceremony held at the Potocari Memorial Center in Srebrenica.

© AP Photo / Marko Drobnjakovic
Some 70,000 Expected in Srebrenica to Attend Massacre Commemoration
Serbian Prime Minister Alexander Vucic was attacked at the commemoration of the Srebrenica tragedy on Saturday, when he and the Serbian delegation had stones and other objects thrown at them by an angry crowd.
© AFP 2021 / DIMITAR DILKOFF
Moscow Wants Justice for 1995 Srebrenica Massacre Victims
A number of individuals from the crowd that gathered at Potocari attacked the security of the Serbian delegation in an attempt to reach Vucic, leading to a physical altercation.

According to reports, Prime Minister Vucic was hurt when a stone hit him in the face breaking his glasses before being leaving the ceremony, held at the Potocari Memorial Center at Srebrenica.

"The Prime Minister was hit in the face by a stone, he is injured, but it's not serious," a member of the Serbian delegation told the Serbian Blic newspaper.

"They were throwing stones, shoes, whatever they came with."

Bosnian newspaper Dnevni Avaz reported that Bosnian police arrested a member of the group which attacked Vucic and the Serbian delegation as they passed by a crowd of people at the Potocari Memorial Center, where the remains of the victims of Srebrenica are buried.

The ceremony at Srebrenica was also attended by the presidents of Croatia, Slovenia and Montenegro, the prime ministers of Albania and Turkey and former US President Bill Clinton, who commended Vucic and the President of Croatia Kolinda Grabar Kitarovic for coming to the ceremony. "As a friend of Bosnia I would like to thank the premier of Serbia for showing the courage to come here today," said Clinton.

After he arrived at the memorial ceremony, Vucic wrote a message in the book of condolences, and was greeted by the organization 'Mothers of Srebrenica.'

"Thank you for coming," said president of the organization Hatidza Mehmedovic to Vucic, who pinned the Flower of Srebrenica, a symbol of remembrance, on the lapel of the Prime Minister's jacket.

Before arriving in Srebrenica Vucic had issued a statement which he condemned the "terrible crime" which happened at Srebrenica, and explained his reasons for attending the memorial, which marks 20 years since the tragedy in 1995.

"Twenty years have passed since the terrible crime that happened at Srebrenica. There are no words which can express the sorrow and sadness for those who suffered, and the anger and bitterness towards those who committed that monstrous crime. Serbia, clearly and unequivocally, condemns that terrible crime, abhors those who took part in it and will continue to bring them to justice."

"It is my responsibility to bow before the victims, an act with which we can move towards the future," said Vucic.

On Friday, Russia called on the UN to bring the perpetrators of the Srebrenica massacre to justice.

Kerry: People Behind Srebrenica 1995 Massacre Should Be Brought to Justice

Ex-President Bill Clinton to Head US Delegation to Srebrenica Commemoration