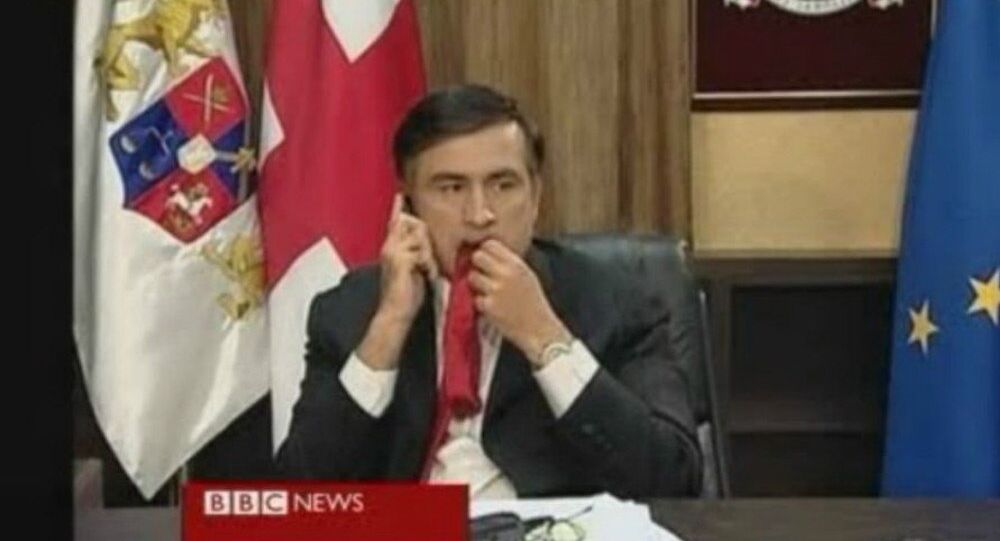 Activists in the Ukrainian port city of Odessa are continuing their protest campaign against newly appointed Governor Mikheil Saakashvili, this time launching a giant red balloon featuring his image and the phrase 'Mishiko Go Home!', complete with a large red necktie dangling from his mouth.

The activists carried out their protest on Thursday in front of the Odessa Regional Administration, capturing video of the balloon as it slowly flew away into the clouds.

The footage of the balloon flying away is accompanied with the beloved song from the closing ceremony of the 1980 Moscow Olympic Summer Games, where a balloon version of 'Misha', the Russian diminutive for both 'bear' and 'Mikhail', was shown flying away into the clouds. Activists decided to reuse the song in a sarcastic tribute to Saakashvili. The song features the fitting lyrics "Farewell to you, our dear Misha, Go back to your fairy tale forest."

"Odessa residents call on Saakashvili to 'return to his fairy tale forest.'"

© Photo : http://1-news.net/ua/
'Saakashvili Go Home!' Odessa Activists Demand Governor's Dismissal
The giant red necktie in the governor's mouth is an obvious tribute to the famous BBC video footage of Saakashvili munching on his necktie in 2008 as he waited for an interview with the BBC in the midst of Georgia's war against the breakaway regions of South Ossetia and Abkhazia.

Following the footage of the balloon is an appeal by one of the protesters. "Odessa remembers that the war against South Ossetia was unleashed on Saakashvili's direct orders. And now he is planning to start a war against Transnistria [a breakaway region of Moldova bordering the Odessa Region]," the activist notes. "Along with the other residents of Odessa, I believe that this is another amateur, a temp worker from a foreign country who has come to power," she adds.

The action was organized by the public movement ' For Odessa as a Free Port', headed by local activist Alexei Tsvetkov, who earlier announced that he was collecting signatures to force Saakashvili's resignation. "Odessa must receive the right to elect its governor. No one is happy with Saakashvili, who is a clown, Tsvetkov noted. "We will continue to carry out such actions, since we do not have any respect for this person," he added.

© AFP 2020 / VASILY MAXIMOV
Saakashvili’s New Nightmare: 'I Know Kremlin is Planning Something…'
This is the second action of its kind in a week. Earlier, a small group of anti-Maidan activists held a rally demanding Saakashvili's resignation, holding banners reading "Saakashvili go home" and "Saakashvili is a war criminal" and bringing along a goat wearing a red necktie. The rally was cut short by unknown men dressed in camouflage and balaclavas, presumably from one of Ukraine's local ultranationalist self-defense battalions, who assaulted some of the protesters and took away their banners.

Former Georgian President Mikheil Saakashvili, wanted on corruption charges in his home country, was appointed governor of Odessa May 30.