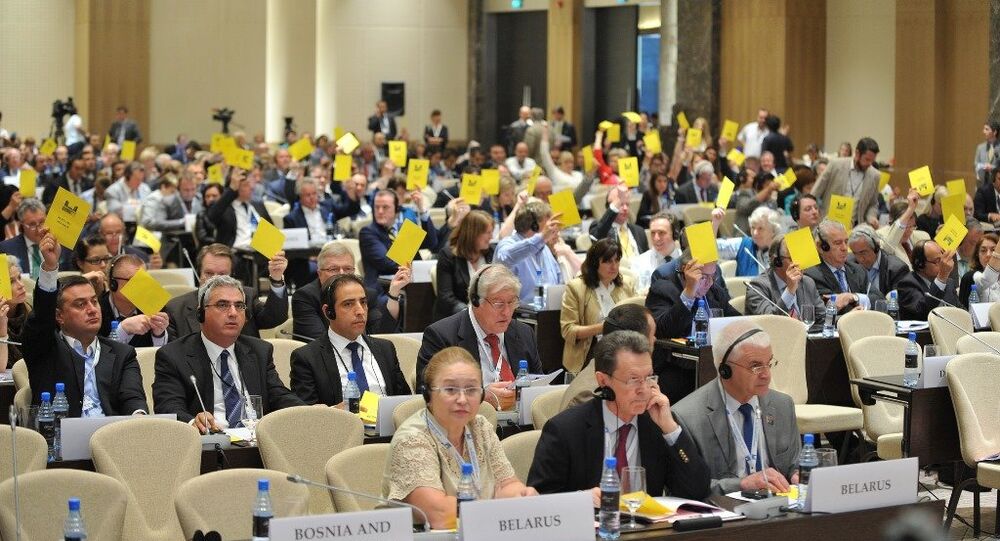 Over 50 Members Back Letter Condemning Russian Exclusion From OSCE Session

According to the Italian lawmaker, members of his party started the initiative by collecting signatures of other OSCE PA delegates.

HELSINKI (Sputnik) — The Italian delegation delivered a letter signed by 55 delegates condemning the exclusion of Russia from dialogue within the annual session of the Organization for Security and Co-operation in Europe (OSCE) Parliamentary Assembly (PA) in Helsinki to the OSCE PA President on Thursday, Claudio D'Amico from Italy’s еurosceptic Lega Nord Party told Sputnik.

According to the Italian lawmaker, members of his party started the initiative by collecting signatures of other OSCE PA delegates.

"Mr. President, I would like to mention to the presidency that we have a signed statement regarding a misfortune that the Russian delegation was unable to attend this meeting," Sergio Divina, from Italy’s Eurosceptic Lega Nord Party, said. "It is in the spirit of Helsinki principals to stress the importance of dialogue between parliamentarians."

Earlier, D'Amico informed Sputnik that all members of the Italian delegation, as well as the heads of the Austrian, Swiss, German, Belarusian and Maltese delegations supported the initiative.

In their letter to the OSCE PA President, Finnish parliamentarian Ilkka Kanerva, the delegates "expressed a regret about the fact that it was not possible for the Russian delegation to participate in the general session of OSCE PA."

OSCE Parliament Assembly Engaged in Propaganda Instead of Working - Lavrov