The ultimatum that protesters against utility hikes in the Armenian capital of Yerevan put forward to the government has expired on Monday at 9 p.m. local time (17:00 GMT). 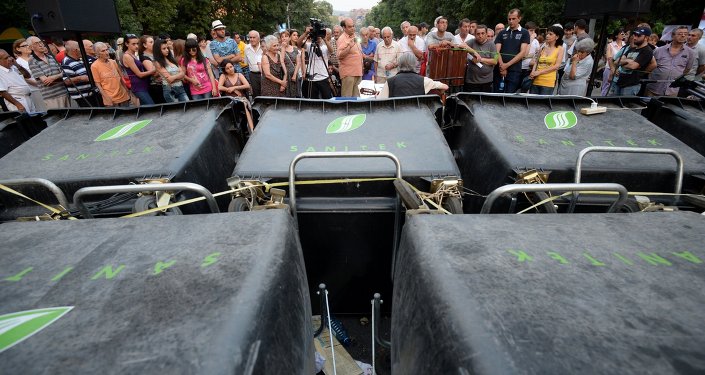 Otherwise, they warned to start a "Step Forward" campaign – a pledge to "move the barricade one meter closer to the presidential administration every day." The police warned in advance they would not allow demonstrators to go forward with the idea.

As of Monday evening, some 300 to 500 activists gathered in downtown Yerevan's Liberty Square, less than a mile from the site of mass demonstrations and detentions earlier.

"We will continue our fight and we will return to Baghramyan Avenue," one of the rally organizers, Davit Sanasaryan, told supporters. Sanasaryan said he would go on a hunger strike as a sign of protest.

Authorities detained 46 demonstrators, but released them within three hours. One of the participants, civil rights activist Argishti Kiviryan, has been charged with the administrative offense of disobeying police orders.

Protests began in Yerevan on June 19, triggered by the government announcement of a 16-percent increase in household electricity tariffs.

On June 23, police arrested 240 and left 18 people seeking medical assistance as they dispersed the activists. The injured filed lawsuits in the European Court of Human Rights.

Protests receded in intensity once government officials offered to conduct tariff audits. Nonetheless, the most radical of the demonstrators stayed at Baghramyan Avenue, 46 of whom had been detained and released eventually.

Those 300-500 still at Liberty Square are debating whether to relocate the site of their demonstration or call on supporters to once again cut off Baghramyan Avenue.

Protest Against UK Citizen Held in Guantanamo Begins in London