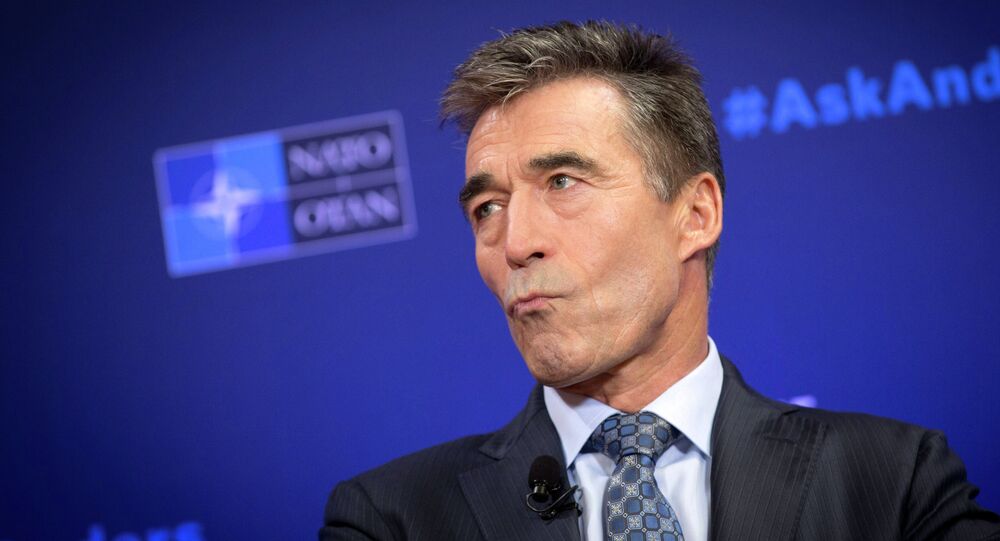 Rasmussen Secretly Promised US Danish Support for Iraq War in 2002

According to reports in the Danish press, the then-Danish Prime Minister assured the US a year before the start of the Iraq war of Denmark's support for the invasion, despite telling the Danish public and parliament that Denmark had no plans to take part.

© AFP 2021
EU Rebellion: UK's Migrant Benefit Reforms Backed by Danish Opposition
Anders Fogh Rasmussen, wo was Denmarks' Prime Minister during the invasion of Iraq, secretly assured the US that Denmark would provide support for the invasion a year in advance, despite telling the Danish public that no such decision had been made, the Danish press reported on Thursday.
© Photo : Twitter/ ‏@MagnusRanstorp
Danish Intelligence Chief Resigns Hours Before Release of Copenhagen Report
The Danish newspaper Politiken announced it had gained access to a classified report from the Prime Minister's archives, which gives details of a meeting in March 2002 between Rasmussen and then US Deputy Secretary of Defense, Paul Wolfowitz.

According to the minutes of the meeting at the Pentagon, Wolfowitz asked Rasmussen about the Danish government's position on a possible invasion of Iraq.

"Denmark would undoubtedly, when the time comes, provide its support,"

This private assurance contrasts with the pronouncements Rasmussen made to the Danish parliament and public, in which he repeated that no decision had been made on the issue ahead of a parliamentary vote on going to war. Politiken notes that as late as January 2003, Rasmussen told parliament that there was no sense in engaging in "hypothetical speculation" on Danish participation in an Iraqi war.

Rasmussen headed a coalition between his liberal Venstre Party and the Conservative People's Party, and served as Prime Minister from November 2001 to April 2009.

© AFP 2021 / White House Photo-Eric Draper
Photo obtained from the White House shows US President George W. Bush (R) saying goodbye to Danish Prime Minister Anders Fogh Rasmussen in the Oval Office at the White House 08 May, 2003
The opposition Social Democratic Party, led by Mogens Lykketoft, opposed the Danish military's participation in the invasion of Iraq. On Friday Lykketoft told Denmark's TV2 News he was unsurprised by the revelations, given his long-held belief that Rasmussen and then-Foreign Minister Per Stig Moller gave misleading information in the run-up to the war.

"I have the impression that we were the victims of a charade," said Lykketoft, who added that Rasmussen told him that Denmark would wait for a UN decision on military participation, just days before he changed his mind and told Lykketoft he was backing US military intervention.

"When I put him on the spot and said the UN had not approved military action, to the contrary, he said he thought it was always in Denmark's interest to go along with the US, no matter what."

Lykketoft also expressed opposition on Friday to the decision announced on Thursday by the new Danish government, a minority Venstre administration, to close the Commission of Inquiry on Denmark's involvement in the wars in Iraq and Afghanistan.

"It does not look good to interrupt a commission in the middle of its work," the Chairman of the Danish Association of Judges, High Court Judge Michael Sjoberg, told Politiken.

EU to Decide on Human-Smuggler Counter Operation Without Denmark - Source