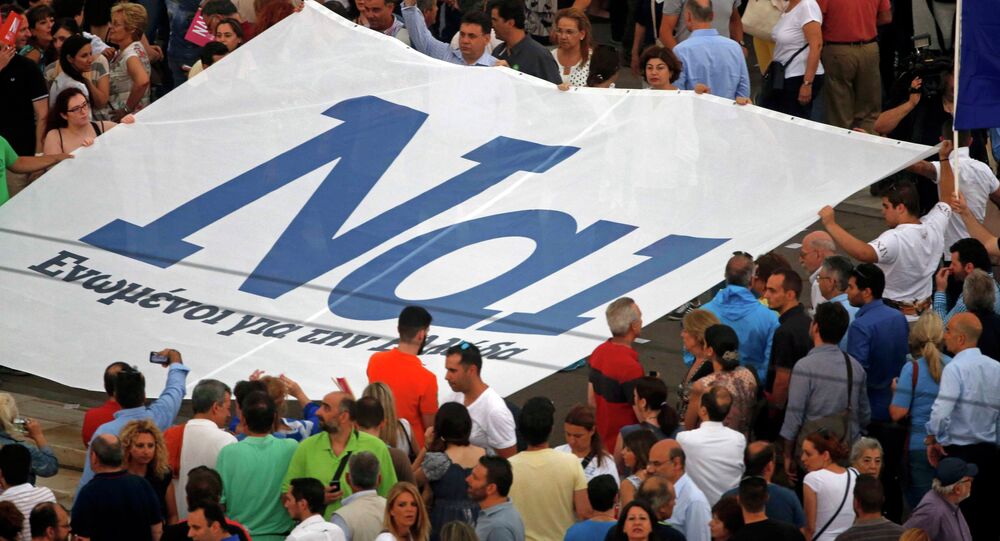 The number of Greek respondents who say they will vote in favor of the austerity measures proposed by the country's foreign creditors in exchange for financial assistance at Sunday's referendum is slightly bigger than the number of those who are planning to vote against the bailout plan, a poll revealed Friday.

© AFP 2021 / EMMANUEL DUNAND
EU Commission Ready to Help Greece if Athens Resumes Talks With Creditors
MOSCOW (Sputnik) – The survey revealed Friday, conducted by ALCO polling institute and published in the Greek Ethnos newspaper suggests that 44,8 percent of Greeks are planning to vote “Yes” while 43,8 percent are going to vote “No.”

The previous opinion poll on the matter, published in the daily newspaper Efimerida ton Syntakton Wednesday, suggested that the majority of 46 percent of Greeks were against accepting the lenders’ proposals and only 37 percent were in favor of such decision. Greek Prime Minister Alexis Tsipras himself urged the voters to reject the bailout plan in its current form.

Last Saturday, Tsipras announced a nationwide referendum for the voters to decide whether Greece should accept its creditors' demands for spending cuts and tax increases – reforms, viewed by many Greeks as “humiliating.”

On Thursday, Greek Finance Minister Yanis Varoufakis said that the government may resign if the country’s people vote to accept the bailout deal.