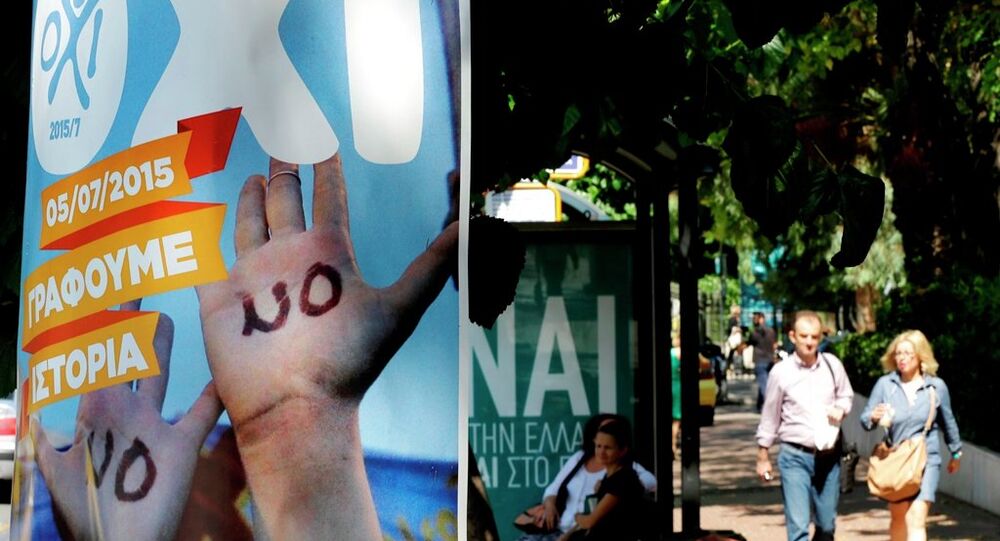 A recent poll suggests that most Greeks will vote to accept the Troika's austerity measures in an upcoming referendum. The country's Finance Minister Yanis Varoufakis remains defiant, however promises to step down if the people vote "Yes".

"Some of us will not be able to stomach it. I will not sign another extend and pretend deal. But I will not scupper it," Varoufakis told Bloomberg TV.

"When you go to battle, you don't talk about defeat. We are going to win on Monday."

A 'No' vote could push the country out of the Eurozone entirely.

A GPO poll carried out by Euro2Day suggests 47 per cent of people were leaning towards a "Yes" vote, which would endorse the austerity measures imposed by Greece's creditors in return for a bailout.

Meanwhile, 43 percent remain in the "No" camp, instead choosing to reject the Troika's demands, siding with Prime Minister Alexis Tsipras.

"The referendum will split the Greek people — we will have a nation divided," Elias Papaioannou, Associate Professor of Economics at the London Business School told Sputnik.

"It will be very hard for both the European Union and the Greek government — who will prevail to unite the Greek people under a common agenda."

Speaking to Sputnik from Athens, Papaioannou says the feeling he is getting from those on the street is that the majority want to stay in the "core of the Euro."

"Discussing the situation with people in the street, with my colleagues, I get the feeling that more and more people are leaning towards a 'Yes' [vote]. But a 'Yes' would imply a division in the economy and a fragmentation of Greek society. It will be hard to heal this wound of the split in the people."

"I hope for a clear cut 'Yes' — but in any event it will be hard to move forward," Papaioannou told Sputnik.

Why we recommend a NO for the referendum — in 6 short bullet points http://t.co/7OtILGeSvz

Meanwhile, when asked by reporters if the government would agree to a proposal that didn't include restructuring Greece's debts, finance minister Varoufakis said: "I prefer to cut my arm off."

The 'Greferendum' planned for Sunday falls short of international standards, according to the head of the Council of Europe, Thorbjorn Jagland.

Jagland says it should be held with at least two weeks' notice for people to truly understand the situation. The vote "has been called on such short notice, that this in itself is a major problem, and the fact that the questions that are put to the people are not very clear," he said.

1) The Referendum Ballot designed by the Greek Government, works as a nudge towards voting ''No''. 2) Lots of people are…

Many Greeks are fed up with the constant technical financial rhetoric and the words of the questions on the ballot, which puts "No" as the top option.

"How many ballots have you seen where 'No' comes before a 'Yes' option?" a source told Sputnik.

The Greek bailout referendum is set for July 5. What do you think the outcome will be?

EU Parliament to Greek Public: We'll Help You, But Not Your Government

Eurogroup Decides Not to Resume Greek Debt Talks Until After Referendum