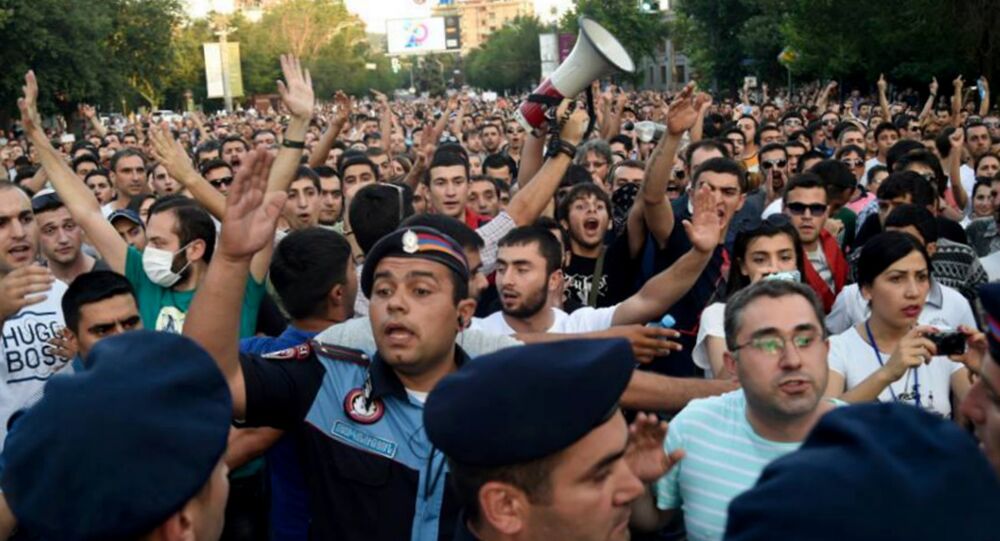 Police in Armenia’s capital Yerevan have detained a protester who was calling for armed action amid a demonstration against a hike of electricity fees planned by the government.

YEREVAN (Sputnik) – The protester resisted law enforcement officers and was detained late on Sunday, a police spokesman said on Monday.

A RIA Novosti correspondent reported in the early hours of Monday that part of the activists started leaving the rally and were heading home, but several thousand people stayed with some of them lying down to sleep on the ground.

Police were not taking any action to disperse the demonstrators who remained peaceful, the RIA Novosti correspondent said. Earlier, Yerevan police said that they were going to use means allowed by Armenian law to clear the central Marshal Baghramyan Avenue by Sunday evening.

Orthodox prayer makes a prayer for peace in #Yerevan as standoff continues pic.twitter.com/Oc84VxxxY5

On June 17, Armenian authorities announced a 16.7-percent increase in household electricity tariffs in the country, which would come into force on August 1. Two days later, mass protests against the rate hike began in Yerevan, with the activists blocking the Baghramyan Avenue.

#bagramyan street in #Yerevan right now. Standoff continues, nobody is ready to pull back pic.twitter.com/NnOXZMB8N2

At the beginning of last week, thousands of protesters attempted to march to the presidential residence in Yerevan. Police detained about 240 people and dispersed demonstrators with water cannons. About 25 people asked for medical assistance.

The protesters demand that Armenian authorities put on hold the decision on raising the household electricity tariffs, start talks on the lowering of the tariffs with activists and hold accountable the police officers who used force against activists and journalists during the demonstrations in Yerevan.

Armenian President Serzh Sargsyan said on Saturday that he was ready to meet with a group of protesters to discuss a possible resolution of the conflict.

Rallies in Support of Protests in Yerevan Go International - Activist

Armenia: The Ghost of the Color Revolution