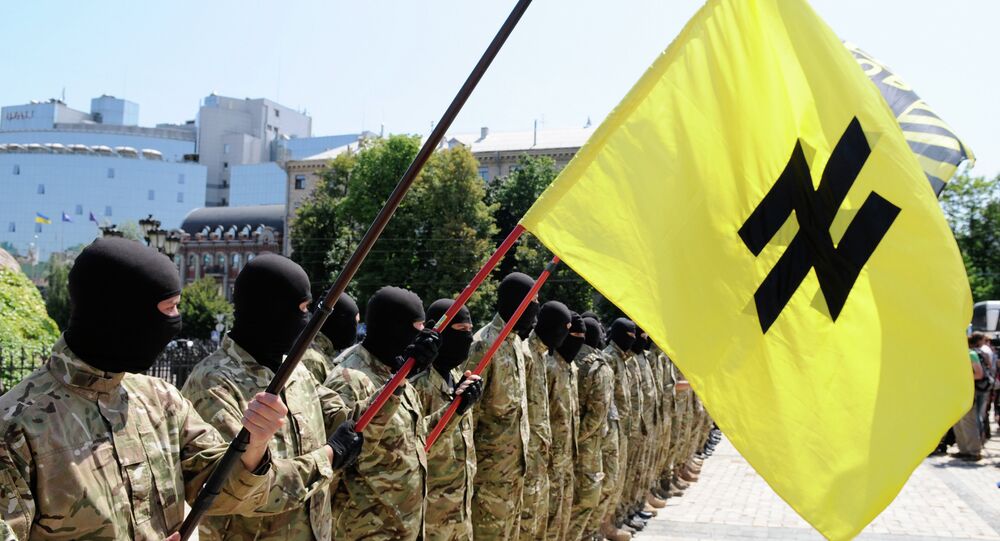 On Thursday, US lawmakers voted against providing training to one of Ukraine's notorious ultra-nationalist militia, the Azov Regiment, on the grounds that its fighters held neo-Nazi beliefs.

© Sputnik / Alexandr Maksimenko
US Congress' Belated Epiphany on Ukraine's 'Repulsive' Neo-Nazis – Moscow
The Russian Foreign Ministry welcomed the move saying it was better late than never. Moscow has persistently urged Western countries to open their eyes to the crimes Ukrainian ultra-nationalists have committed in the Donbass region and elsewhere.

Needless to say, Azov was outraged by the decision itself and the explanation US lawmakers provided. The group turned to Facebook to express the extent of its indignation.

"We are extremely surprised and profoundly outraged by these remarks. Our battalion has always embraced patriotism and has never adopted other world ideologies," the militia said in a statement.

And patriotism of a distinct but worrisome flavor it is.

Take Azov's logo, for instance, which incorporates the Wolfsangel runic symbol, also known as a wolf's hook. The Wolfsangel was present on the insignias of several divisions of the Waffen-SS. Dutch Nazis also used it as a party insignia for a while.

Alexandr Maksimenko
Ukraine's Ultra-Nationalists Try to Stir up Discord in Crimea and Fail
If symbols are not deeds, then Azov's actions speak louder than words.

Azov fighters are under investigation for attempting to commit terrorist acts and setting mosques in Crimea ablaze. The group has been actively engaged in stirring up discord in the Russian peninsula in an attempt to ruin intricate inter-ethnic relations there.

"It took US Congress over a year to see that the [Azov] battalion is a band of sheer Nazis, sporting the emblem used by Hitler's SS and acting like vigilantes on an occupied territory," Russian Foreign Ministry spokesman Alexander Lukashevich said in a statement.

The next step, according to the diplomat, is to finally acknowledge that the 2014 coup in Kiev, Washington eagerly supported, "was carried out by the same Nazi thugs."