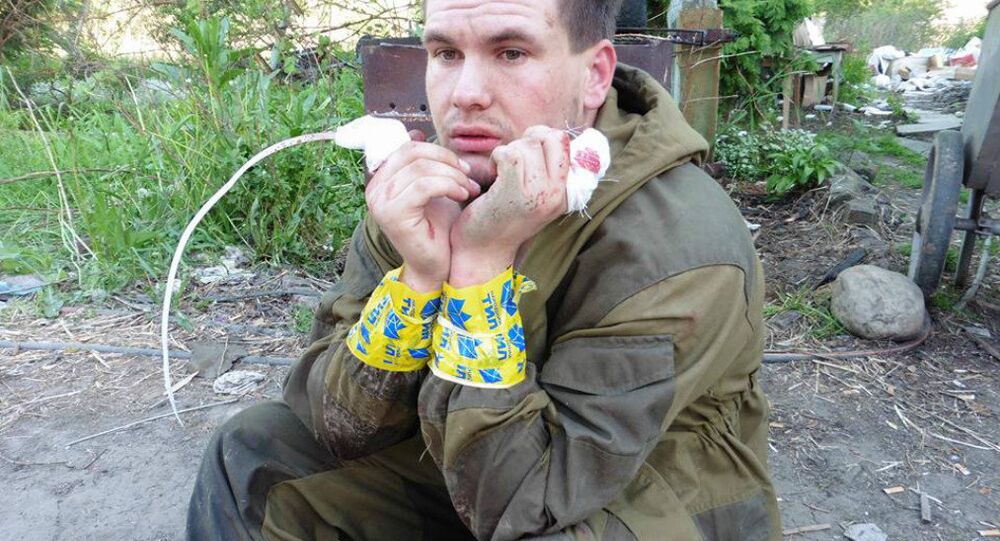 A blogger affiliated with Ukraine's Right Sector paramilitary movement has posted several photos of a member of the Donbass militia with his index fingers cut/shot off. The gruesome images come days after the release of a report by Amnesty International calling on the EU to put pressure on Kiev to punish those responsible for the torture of POWs.

On Saturday, a Facebook user named 'Yashka Tsygankov' posted several graphic photos of what appears to be a captured fighter of the anti-Kiev militia in eastern Ukraine, with his left and right index fingers shot and/or cut off.

Accompanying the gruesome images is some bragging by Tsygankov about a recent operation allegedly carried out by the Ukrainian military against a militia checkpoint. "This was good training for an offensive toward Donetsk…We killed them all, apart from one. Seems to be a local, as of recently."

What makes the post somewhat dubious is Tsygankov's claims about Georgian and American support in the operation. Noting that the operation was led by Right Sector volunteers, the Dnepr-1 territorial battalion and the 93rd Brigade of the Ukrainian army, Tsygankov also noted that Georgian and American personnel and equipment was involved in the battle. The user stated that the Georgian sniper "worked great," while voicing his "thanks to American guidance systems, which provide excellent guidance." Tsygankov also claimed that American spotters participated in the operation.

© AFP 2020 / GENYA SAVILOV
Origins of Hate: Pre-Maidan Textbook Teaches Youth to Hate 'Subhumans'
Commenting on the Facebook post, independent Ukrainian journalist Anatoliy Shari stated that he has his doubts about its authenticity, noting that the post appeared "just on time" to confirm a recent report Amnesty International criticizing Ukraine's treatment of prisoners of war. Moreover, Shari voiced his skepticism about Tsygankov's claims of Georgian and American involvement. The journalist noted that it may be possible that the Right Sector may have created a 'fake' piece of information for the sole purpose of repudiating it as false later. Nonetheless, the journalist believes that the misinformation campaign may backfire on the Ukrainian radicals, with Donbass residents and militia coming to genuinely believe that POWs have their fingers cut off, which doesn't seem unlikely, given the long list of war crimes the Ukrainian army and its volunteer nationalist units have been accused of committing over the past year in the war in eastern Ukraine.
© AP Photo / Tsinghua University
Enraged Ukrainian Facebook Users Declare War on Mark Zuckerberg
Whether or not the post and the accompanying photos are genuine, it's worth pointing out that the commentary to the post is positively toxic in its gleeful and bloodthirsty tone. Users praised the brave warriors of the volunteer units, while laughing about the gold and blue color of the scotch used to tape the injured man's hands together, calling it "beautiful" and "stylish." One user commented that "he won't be able to squeeze the trigger anymore," with another noting that "he doesn't have his fingers but he will live. Let him be thankful that his head was not cut off. This is humanism."

Earlier this week, Amnesty International released a report, notable for the fact that it admits that Kiev too is responsible for the abuse and torture of prisoners of war. The report calls on both sides to "put an end to these crimes," adding that "Ukrainian authorities must investigate all allegations of war crimes and other abuses" and "bring to justice all those responsible for perpetrating such heinous acts."

Among the main criticisms aimed at the Donbass militia is their alleged propensity for carrying out summary executions. Amnesty noted that the situation surrounding militia fighters is complicated by the fact that their ranks include a variety of fighting groups.

© Sputnik / Alexandr Maksimenko
Ukraine's Right Sector Kidnaps People, Demands Ransom - Amnesty Int'l
On the Kiev side, Amnesty singled out the Right Sector specifically, calling one report by a former prisoner of the group "especially disturbing." The rights organization stated that their evidence showed that the group held not just military prisoners, but also civilians, who were held as hostages for ransom, brutally tortured in the process. Amnesty noted that it has yet to receive a response from the Ukrainian government regarding its complaint about the Right Sector's atrocities.

Commenting on the report in an interview for France's Liberation Magazine, Amnesty senior advisor Joanne Mariner stated that the "acts of torture identified by Amnesty International are only the tip of the iceberg."

Asked whether the report and its revelation of Ukrainian war crimes should come as a shock to Europe, Mariner noted that she hopes so. "It would be disastrous if Europe [continued to support] Kiev with knowledge of these facts. The Western media have long focused their attention on the violence committed by pro-Russian separatists, and the content of the report should come as a shock."

Ultimately, Mariner noted that if Kiev "is slow to act in taking punitive measures against the perpetrators, the European Union, which has supported the government of Petro Poroshenko since the beginning of hostilities, can intervene diplomatically," exerting various forms of pressure on its ally.