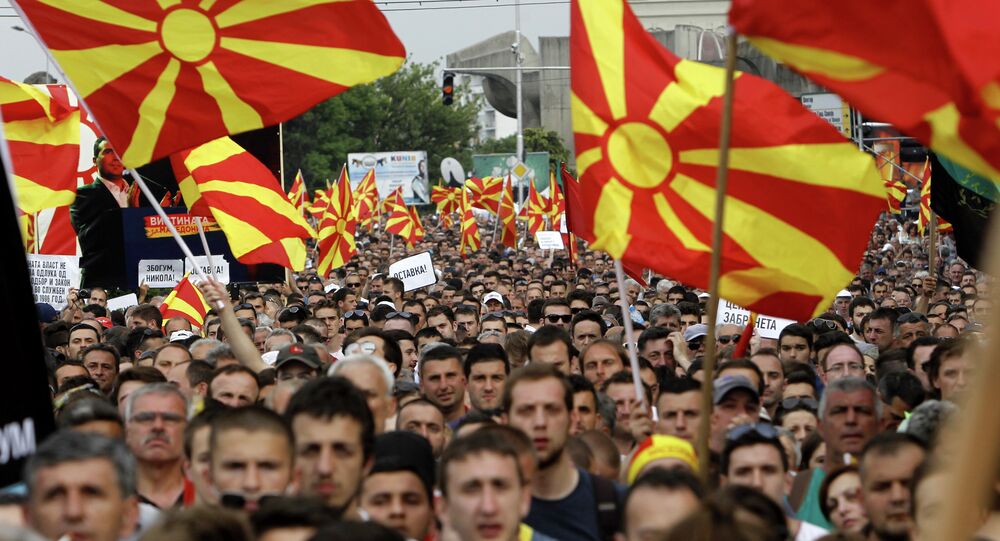 The recent political protests in Macedonia calling for the resignation of the country's leader have divided opinion across the world, with some viewing the protests as an example of people power in action, while others say the uprising is being stoked by the West as part of larger geopolitical game.

Tens of thousands of people took to the streets of the Macedonian capital of Skopje over the weekend, calling for the resignation of Prime Minister Nikola Gruevski, with opponents accusing the PM of widespread corruption, mass spying on the population and engaging in undemocratic practices.

The protest was the largest in a series of recent demonstrations against Gruevski's government, following the release of covert recordings that purportedly showed government officials plotting to engage in vote rigging, and even the covering up of a murder.

Opposition political figures have accused Gruevski of being behind the malpractice, however the prime minister has denied the allegations, saying that opponents had tampered with the audio in an attempt to frame his government.

Vladimir Pandovski, Skopje-based political analyst told Sputnik that the wiretapping scandal enveloping the government was fraudulent, and said the protests in the country were "scripted and staged."

"Everything that is happening in Macedonia has been scripted and staged. We’ve seen this before; it’s a mix of comedy and tragedy. The so-called wiretapping scandal has been the biggest piece of comedy the public has ever seen… and honestly, no one is buying it – everyone is aware that this is an attempt to create a new Maidan, like in Ukraine."

An Ethnic Problem or a Political One?

Central to recent events in Macedonia has been the debate over whether the country is suffering from an increase in ethnic based tension between Macedonians and the country's significant ethnic Albanian minority, which accounts for about 25 percent of the overall Macedonian population.

A recent shooting in the Macedonian city of Kumanovo, which claimed the lives of eight police officers and 14 ethnic Albanian fighters, has also been the source of much debate.

Government figures said the attacks came from ethnic-Albanian terrorists calling for the creation of an Albanian state within Macedonia, sparking fears the country may be heading for another civil war, similar to the one fought between Macedonian forces and Albanian paramilitary groups in 2001.

More evidence of large-scale EU meddling in Macedonia as part of its 'Europeanization' agenda http://t.co/rcDQ05Yhql

However, Gruevski's opponents were highly critical of the timing of the shooting, accusing the government of staging the attacks to highlight the apparent ethnic tension and to draw attention away from the government's current woes.

To show solidarity against the claims of ethnic-based violence within the country, many people carrying both Macedonian and Albanian flags took part in Sunday's protest in Skopje.

Protests in Macedonia are only the beginning of a summer of unrest in the Balkans: http://t.co/WBkl7DNNj5 pic.twitter.com/6MOYl0Aj8i

Dr James Ker-Lindsay, researcher in Balkan studies at the London School of Economics, told Sputnik he doesn't think Macedonia is suffering from an outburst in tension between Macedonians and Albanians.

"I think we've got to be careful about this idea that this is necessarily an ethnic problem. What we have essentially in Macedonia is a political problem at the moment."

Dr Ker-Lindsay believes the accusations of malpractice against the government have led many people to question whether the recent attacks were part of a separatist movement, as claimed by Gruevski.

"At first, public opinion was all a bit skeptical about this, but as the revelations keep coming out, people are starting to turn against the government," he said.

"What has happened is that a lot of people in Macedonia are saying 'this is just all becoming a bit too convenient'. What Macedonia needs is a transition government to be put in place and proper democratic elections held."

Outside Intervention: The Global Power Game

As the debate over whether Macedonia is experiencing an ethnic or political problem continues, attention has turned to the cause of the recent uprisings, and whether western interests had a role to play in sparking the turn against Gruevski's government.

While Macedonia's main opposition leader Zoran Zaev, whose party organised Sunday's mass demonstration in Skopje, claimed the protest was an example of the Macedonian people taking a stand against the government, others have suggested that the flames for the recent uprising were stirred from outside the country as part of a strategic power game.

Situation in #Macedonia alarming. Clear attempts to push the country towards the abyss of a “colour revolution” pic.twitter.com/YH6luWj3Dg

The Russian Foreign Ministry, reacting to media reports of the arrest of a Montenegrin, who assisted ethnic Albanian extremists in Macedonia, released a statement saying there was:

"Convincing proof of plans, launched from the outside, to destabilize the political situation in the country."

As well as attempts to "push" the country into a "color revolution."

The ministry also said that western organizers behind such rallies against the government were targeting "countries that are attracted by the NATO bait."

Backing up the claim that outside involvement has triggered the destabilization of Macedonia, Dusan Prorokovic, an expert in Balkan affairs told Sputnik that the recent trouble and perception of ethnic tension has been stirred up by western actors.

Avalanche of resignations and replacement in Skopje tonight points at severity of the crisis in Macedonia.

Prorokovic told Sputnik that the support for action against Gruevski's government was part of a geopolitical game to try and increase western influence in the region and prevent the creation of the proposed Turkish stream project, which plans to transport Russian gas to Europe via Turkey and the Balkans.

"The concept of Greater Albania is once again relevant but it won't see any progress without the help of the North Atlantic bloc.

"I think why all of that happened is more linked to Turkish stream and the defeat of the US in Ukraine, than to local Albanian interests."