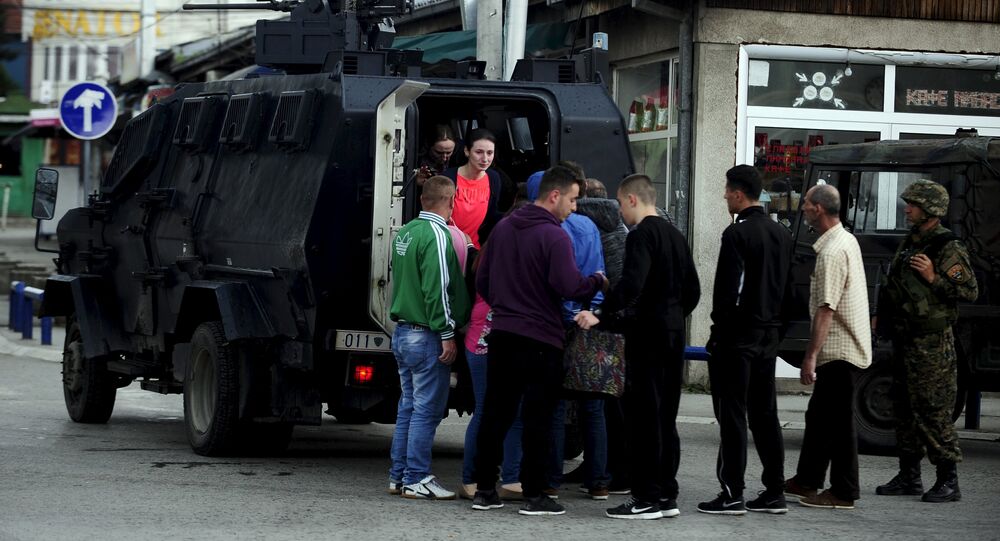 The recent terrorist attack in the city of Kumanovo has prompted Bulgaria to send military troops to its border with Macedonia in order to assist the Border Police in stopping a possible influx of refugees into the country.

Bulgaria has sent its soldiers to the border with Macedonia after the terrorist attack in the city of Kumanovo that claimed the lives of 14 gunmen and eight police officers.

"The army is at the border, working on its points, in case the situation in Macedonia worsens," Bulgarian Prime Minister Boyko Borisov told parliament on Wednesday.

© AP Photo
Macedonian Conflict: 'Greater Albania' Used by West to Destabilize Balkans
"We are following the events in Macedonia with concern. There are no killed Bulgarian citizens. Apart from the declaration and the position of the Foreign Ministry, yesterday there was a meeting of the Security Council," adding that May 17 would be a key date in Macedonia because a preplanned public protest rally would be held on that day.

Bulgaria's Defense Ministry has rushed to clarify the statement of the Prime Minister, saying in response to questions from the local media that the military have been sent in order to stop a possible influx of refugees and highlighting that the move did mean a full-scale deployment of armed units and military combat weaponry.

© REUTERS / Marko Djurica
Macedonian Conflict: The Pot of Arab Spring Boils Over the Balkans?
Bulgarian Defense Minister Nikolai Nenchev underscored that the tragic incident in Macedonia does not pose a direct threat to Bulgaria.

"At this stage there is no direct threat to Bulgaria resulting from the latest events in Macedonia. I get information from the Military Information Service. If necessary, we are ready to interact and provide full cooperation in guarding the Bulgarian border," he said in an official statement on Wednesday.

However, the Bulgarian authorities are expressing concerns regarding turmoil and a possible humanitarian crisis in Macedonia, a country where the Albanian ethnic minority comprises more than 30 percent of the population.

© REUTERS / Ognen Teofilovski
NATO Uses Clashes in Macedonia to Undermine Russia's Gas Pipeline Project
The peace in Macedonia has been hanging in the balance since 2001 when an accord between the Slavic population and the Albanian minority was concluded.

Bulgarians have always considered Macedonia a fraternal nation and their country has expressed its deep concerns regarding the ongoing crisis.

Bulgaria's opposition parties, particularly ABC, the nationalist Patriotic Front, the Bulgarian Socialist Party and the Movement for Rights and Freedoms, have called upon the EU to carry out effective measures to stop the ethnic conflict, confirm the enlargement policy of the European Union and consider concrete prospects for Macedonia's European integration.

However, Greece's decision to block the EU talks on Macedonia's accession remains a stumbling block in the way of Macedonia's European future. Athens has demanded that Macedonia should change its name, which coincides with the name of a northern Greek province.

Bulgaria and Serbia sent already troops close to the border with #Macedonia It is fatal mix of mafia,terrorists and vision of Great Albania.